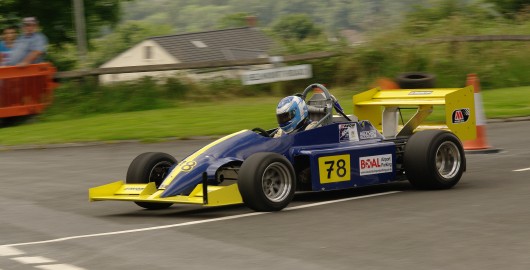 Last weekend 11th August, Garron Point played host to round 8 of the ANICC Miller’s Oil’s Hillclimb Championship. Situated on Northern Ireland’s picturesque Antrim Coast it gave us the perfect venue to play out the much anticipated title decider. Only the ever popular saloon and sportcar classes will only go on to contest the last round at the fast Spelga Pass hill climb course on the 25th of August.

With the country basking in Olympic fever the title race was hotly tipped to be a photo finish. The battle for overall championship honours would be fought out between Antrim’s Graham Thompson and Dungannon’s Seamus Morris who contest class 15 for big single seater racing cars.
A titanic battle has ensued all season with Thompson going into the previous round under some pressure as another win for Seamus in either of the last two rounds would have gave him his first Hillclimb Championship. But Graham rose to the challenge and set a pace at Craigantlet that Seamus simply could not match. So as they came to the line on Saturday (providing they finish first and second) the position is straightforward. If Graham won, he took another title – if Seamus won and Graham was second they will tie but Seamus will take the title on the tiebreak rule !

The usual efficiency of the Mid Antrim Motor Club provided the 47 competitors with a prompt 10.30am start, but the first practice got off to a false start when the first car on the hill only got as far as the second corner spinning out on cold tyres. Unfortunately Ricky M’cGimpsey’s RGM Busa made contact with a stone wall with the resulting suspension damage bringing a premature end to the event for the duel entered car. With good weather organized and no more incidents on the hill the rest of the event ran like clockwork.

As the title duel unfolded Graham Thompson’s GTR Turbo 1300 seemed to be the car to have as he posted fastest times in his 2 practice runs and after lunch continued in the same vein using all his experience to go fastest in the all 3 timed runs. With Graham seemingly on-fire, the season long battle with Seamus Morris and his Pilbeam was all over and Graham took his 4 Championship in a row with a new hill record of 37.15, which was set in the second timed run.
Graham commented after, “Seamus and myself have had a great battle all year. It was fitting that the championship went down to the last round at Garron Point as it has been so even all year. I have had to keep developing my car to keep up at the sharp end and after a few teething problems at the start of the year it all paid off with a new hill record at Drumhorc and Garron Point hillclimbs. Hopefully next year the battle will continue.”

The battle for the Modified Saloon title is also proving to be a cracker with Davy Francis’s Ford Escort Cosworth and Rudi Gage’s Maguire Mini tied going into Garron. At the end of the day, Davy took the win by three hundredths with a banzai last run to snatch victory from a hard charging Rudi. Davy now looks favourite to retain his title with only the superfast Spelga round left.

In the Roadgoing Saloons, Adrian Mulholland’s RS2000 edged closer to the absent David Hunter but the dropped score rule at season’s end will probably favour Hunter in the final standings.

In the classes, Adrian continues to gain the upper hand late in the season over Colin McCann’s MK2 Escort in the Roadgoing Class 2. Tom Lawther in the mighty Rover SDI was edged out of 3rd place in the Class at Garron by Richard Walsh in the Alpine GTA and they are now tied for 3rd place in the Class Championship. Simon Jamison in the Peugeot 205 GTI had another good win over Nigel Kinnaird’s Fiesta to take control of Class 6A Modified as has Paul Buchanan over Alwyn in 6B. Robert Davison in the MGB GT got back into winning ways with a good win over Michael Adams’s MG Midget in the Historic Class.