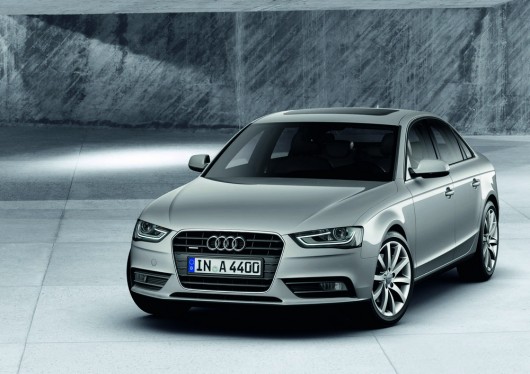 Audi’s new A4 model goes on sale in Ireland today. In early October Audi delivered the 10 millionth A4 model to a customer in Germany cementing its position as Audis most popular model. Since its Irish launch back in February 2008, the 8th generation the A4, has topped the highly competitive premium B segment sales table in Ireland for each of the past four years. Its domination of this segment is now set to continue into 2012 due to an extensive mid life refresh. Due with their first Irish customers in mid February 2012, the new generation A4 ranges will carry broadly similar price tags as their outgoing equivalents, despite significant styling enhancements, equipment upgrades and efficiency gains of up to 21 per cent. Prices will start at €33,040* OTR, and orders can be taken from today (December 8th)

The new A4’s drive system sets new standards. The consumption levels have dropped by 11 percent on average, despite the increased power and torque of many of the engines. In the Saloon and Avant, Audi offers any of six TDI and four TFSI petrol engines, with 23 possible engine-transmission combinations. All engines are supercharged direct-injection systems; the start-stop system and the recuperation system are standard throughout. For Irish customers the good news is that the ever popular 2.0TDI 120 variant now sips even less diesel thanks to a more intelligent thermal management system and a new redesigned, more efficient climate control system. It now emits just 119g leading to annual road tax of just €104* and fuel consumption of 4.5litres per 100km or 63mpg. Electromechanical power steering is new to all models in the series. Its direct gear ratios work in favour of precise response, and it draws no power from the engine when running in the straight-ahead position, thereby improving fuel economy and reducing CO2 emissions by up to 7 g/km.

All front-wheel-drive versions of the A4 feature the electronic stability programme (ESP) with electronic limited slip differential. When negotiating more challenging roads the system further improves handling and safety by initiating minimum brake interventions at the front wheel that is subject to a reduced load on the inside of a bend. The large brakes – with ventilated front and rear discs in many variants – offer excellent stopping power and can be precisely modulated. The changes under the bonnet have been matched by extensive exterior and interior enhancements. Visually, the latest refinement of the A4 range begins with a reworked bumper with new look angled air inlets and flat fog lights which leads into a revised single frame grille with tapered upper edges and redesigned cross ribs. Flanked by restyled headlights, the grille flows into a re-sculpted bonnet. The headlights have also changed, with a slight wave at the bottom edges, and a re-arranged interior. 4 new colours form part of a 15 colour choice of exterior finishes available to customers.

S Line specification is a new line addition for the A4 in Ireland and is, as usual, the choice for more performance-oriented drivers, and includes larger 18-inch alloy wheels, lowered sports suspension, S line exterior and interior styling enhancements and xenon headlamps with LED daytime running lamps and rear LED lights. Sport seats in Leather / Sprint cloth finish with lumbar support finish the look. S Line also contains all of the equipment contained in SE and is available for a premium of €3,750 above the SE version. An exciting new option available across the board is a high specification mobile phone interface offering online services, which not only brings a Google-powered Points of Interest search and navigation using Google Earth images, but also creates a Wireless Local Area Network (WLAN) hotspot within the A4 enabling occupants to connect phones and computers to the Internet wirelessly.

To minimise the risk of unintentional manoeuvres caused by fatigue, all A4 models are also equipped with a Break Recommendation function built into their Driver’s Information System. It uses a steering angle sensor to monitor steering movements, and also assesses use of the pedals and gear lever. If the sensors detect irregular or overly sudden driver inputs the driver is alerted to the possible need to take a break by audible and visual cues in the cockpit.

Andrew Doyle, Managing Director of Audi Ireland commented, “The Audi A4 has been a hugely successful model for us over the past number of years. It has outsold all segment competitors since its launch in 2008 and we are confident the new Audi A4 will again mark a new chapter in the success story in 2012.”

“The new Audi A4 demonstrates Audi’s leadership in design and engineering. Although this new model retains the main characteristics of its highly successful predecessor, the new Audi A4 will deliver significantly reduced fuel consumption levels and unrivalled specification levels.”