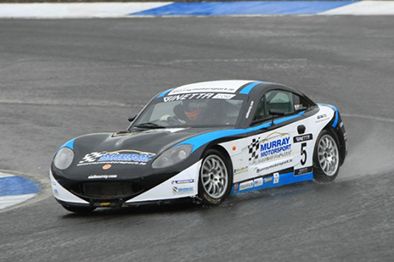 Niall Murray made the trip up north to Knockhill Racing Circuit in Scotland for Rounds thirteen and fourteen of the British Ginetta Junior Championship. On the back of a difficult weekend at Snetterton, Niall was keen to pick up a good haul of points to keep him in sight of his seasons goal, top 5 in the Championship.

Qualifying was ultra close with only one second splitting the top thirteen drivers! Niall was showing impressive pace during the session and happier in the car after a difficult morning free practice session. Towards the end positions were changing as each car past and Niall set a very good lap time to put him seventh on the grid for the opening race one.

Murray got a very good start off the line and was keen to make his way up the order before the leaders broke away. A series of superbly executed moves on Sennan Fielding and Tom Howard put him up to fifth after just three laps. With George Gamble running wide, this now put Niall in fourth position with the lead pack clearly in sight. Jake Giddings was yet another driver from the lead pack to run wide which now put Niall in third and still closing on Struan Moore. On Lap ten the safety car was deployed to allow the marshals recover a stricken Jake Giddings. With the field now bunched up as safety car pulled off and racing resumed, it was now going to be a two lap shoot out to the flag. The safety car period had allowed a recovering and very hard charging George Gamble to find a way past Murray which also let Sennan Fielding follow through and squeeze Niall wide onto the gravel to allow another couple of drivers through. Now back in seventh, Niall put in a very valiant effort on the final lap to re-pass William Foster and finish a very eventful race in sixth.

After a very impressive showing in Race one, Niall was keen to take his place on the podium in the final race of the weekend. Starting from eighth position, Murray was keen to make his way up the order quickly once again. An excellent start off the line and a great opening lap put him in fifth as they completed lap one. With Seb Morris running wide and slipping down the order, Niall was able to capitalise on this and move into fourth. Tom Howard was handed a drive through penalty which then promoted Niall into a podium position  A very slick move on Sennan Fielding then put the young Dubliner into second place! However a mistake in the very tricky Chicane let Niall slip down to sixth as they safety car was deployed. Having managed to work his way back up to third in the closing stages of the race, Niall was struggling for grip as the race went on and he was now under pressure from a hard charging Charlie Robertson who managed to slip past with two laps to go. As the chequered flag dropped Niall crossed the line in fourth which was a good result for the weekend.

Reflecting on the weekend, Niall commented on his disappointment at missing out on two potential podiums. “Naturally, I’m gutted to have not gotten at least one podium finish this weekend, the fact that I was in a podium position during both races. However, I was happy with my pace and was mixing it with the leaders in both races, despite starting down the grid.”

Niall will be competing in Rockingham in two weeks time in Rounds fifteen and sixteen of the Ginetta Junior Championship.