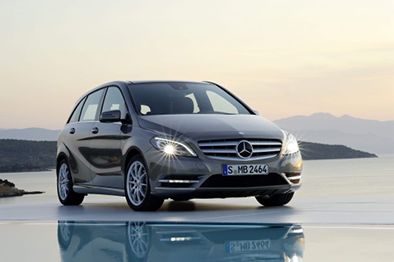 Making its debut at this year’s Frankfurt Motor Show is the new Mercedes-Benz B-Class, first versions of which will arrive here in December.

Representing what Mercedes themselves call ‘a quantum leap in the compact class’, the new B-Class is the larger of the two Mercedes-Benz compact models alongside their entry-level A-Class series.

In material published to announce its introduction, Mercedes-Benz says that no model change in their history has ever seen so many new developments introduced in one fell swoop.

First amongst these are two new turbo-charged four-cylinder petrol engines of 1.6-litres/122bhp and 2.0-litre/156bhp capacity – both of which are equipped with direct injection systems similar to those fitted to their higher-capacity V6 and V8 engines. In diesel, two new four-cylinder common rail direct-injection engines – a 1.8 CDI/109bhp and a 2.0-litre/ 136bhp – are a further development of those already installed in C, E and S-Class models.

Transmission systems comprise of a new 7G dual clutch transmission that combines the comfort of an automatic with the efficiency of a manual and a new 6-speed manual transmission that is characterised by extremely easy gear change with low shift forces. Incorporated in the 7G system is an electric oil pump that works an ECO start/stop function that is a standard feature on all B-Class models.

Other features include low fuel consumption and CO2 emissions, outstanding aerodynamics, improved driving characteristics, generous interior space and a high standard of safety in line with other new models from Mercedes-Benz.

Visually, the most striking aspect of the new the B-Class is its reduced height: at 1557 millimetres, the new model crouches almost five centimetres lower on the road than its predecessor. Seats are more upright and seat height in relation to the road has also been reduced by 86 mm. Headroom has been improved – with 1,013 mm at the front (without sliding roof) it is amongst the most spacious in this respect.

Inside, the B-Class boasts plenty of space. One optional item is a system that allows the interior to be reorganised so that bulky items may be carried. It provides for fore/aft adjustment of the rear seats by up to140 millimetres and a front passenger seat whose backrest can be folded forward onto the seat cushion.

Said by Mercedes-Benz to be ‘fascinatingly agile’ without cost in terms of comfort, the new B-Class has a lowered centre of gravity, redesigned electromechanical steering, new four-link rear axle and upgraded electronic stability programme.  A sports suspension, lowered by 20 mm, with direct-steer system to emphasise its sporty character, is available as an option.

An array of extra safety measures includes such goodies as adaptive head lamp, blind spot, lane keeping and speed limit assist systems along with parking assist, hill hold brake function; reversing camera and distance control systems – features adopted into the B-Class from larger Mercedes-Benz models and introduced for the first time in this class of vehicle.

A world-first in the compact segment is the provision of a new radar-based collision prevention warning with adaptive brake assist as standard to reduce the risk of rear-end collisions.

Forward looking in its design, the new B-Class comes with an enhanced variant of the double-skin, twin floor concept to accommodate any alternative drive systems that may be developed in the future.