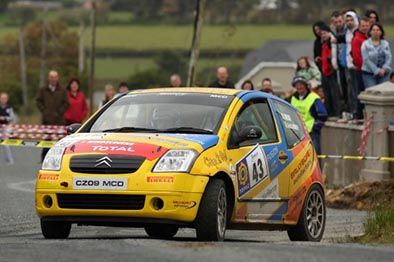 Scott McElhinney has lifted the big prize this weekend as he is now uncatchable in the Citroen Racing Trophy Ireland points table. The Donegal driver scooped 4000€ for the Citroen win in Wexford, and will receive an additional 6000€ Citroen parts voucher for his series win! The title race was expected to go down to the final round in Cork, but a non finish for title challenger Kieran Daly put paid to that. As normal for the Citroen Trophy rounds that wasn’t the whole story. “We knew coming into this event that we really needed to finish in front of Kieran. He was on a wild pace for sure, and it’s hard to keep that pace up too. We had no problems with the car all weekend, and we were probably on the safe side as regards tyre choice and fuel load, and this time it worked out for us.”

Conditions were wet for the opening Wexford stages, and on special stage 1-Forties 1, Kieran Daly and Darragh Mullen posted a flying time of 9 minutes and 5 seconds. It was a time fast enough for second overall in the event, 12 seconds behind Damien Cole’s WRC Focus. It was a superb start for the championship challenger, but on stage 2 the progress went backwards. “It was on a fast junction. There was a puddle on the exit and when we clipped it, we got dragged into the verge. There was a rock in there which broke the wheel and we had to change it.” The time loss was over 3 minutes, and with the wheel fixed they posted fastest C2 times on stages 3 and 4, but coming into service a damaged steering rack needed to be changed. Thanks to Donal Healy and the crew the offending part was replaced with one sourced from local car breakers with seconds to spare as Kieran set out to try and regain positions. “We knew that we had to finish second to Scott to really ensure a championship race in Cork, and we set our sights on second. We had to drive to the maximum and we knew that it would have more elements of risk.” Indeed two splendid 3rd fastest overall times on the dry day two morning tests brought them to within 26 seconds of that goal, but on stage 9, the championship hopes faltered. “We were waiting a little while to start that stage, and the tyres had gone cold. I just got caught out on cold tyres on the first real braking zone. She stepped out before the corner, we corrected that, but when we turned into the corner she stepped out again, and this time we hit the back arm, bending it too badly to continue.” It was all over for Kieran, who had a race against time to make the rally, with an engine just re-fitted to the car after its eventful trip to Oreca in France in the early hours of Friday morning.

Joe Shrimpton and Ciaran Geaney slotted into second behind Scott McElhinney, a position they held to the end of the first day’s six stages, just 36 seconds behind McElhinney. It was so far the best showing for the young driver. Also showing well was Peter Barrable who 23 seconds behind Joe in third, having had a slow start, but getting up to speed. David Carney with Ray Fitzpatrick on the notes too was having his best showing of the season just 10 seconds down on Barrable in fourth place.

An early retirement on stage 2 was Limerick’s Kevin O’Connor with an engine that seemed to be mixing its oil and water. Welsh visitors Steve Wood and Aled Richards were having a ball, and they would finish the event in fourth place after the day two retirements. “We loved every minute of it” commented Steve. “The pace is serious, the welcome was great and now we have finished this one, we are seriously looking at contesting the Cork 20.”

The second day was a formality for Scott McElhinney and co-driver Karl Reid, but they had a scare on the opening stage of the day slipping into a ditch briefing. “It was a bit of a wake-up call!” explained Scott, “It was a second gear left hander that tightened and as we turned around it there was a lot of water across the road.  It was like a bottle and two cars running ahead of us had been off the road on it. We slid into the bank and stalled. When we selected reverse, we realised we were between two banks, so we lost about 10-15 seconds.”

There was a great battle for second which Joe Shrimpton held until stage 9, despite a moment on McElhinney’s corner on stage 7. A charging Peter Barrable edged in front having taken time all morning. Joe dropped another place on stage 10 as David Carney edged ahead and into third, and Shrimpton’s fortunes took a tumble. Firstly an engine misfire was costing time. Leader Scott McElhinney kindly lent him his spare throttle body to fit, but on the final stage Joe’s fourth place evaporated when the C2 lost all drive.

In the end Peter Barrable claimed second, just twenty seconds back from Scott McElhinney, with David Carney in third. Peter, David and Joe Shrimpton all showed an improved turn of speed this weekend, and could now be a threat to the front runners in Cork. However with the series sown up the pressure is off for Scott McElhinney. “It’s brilliant to take the series. We weren’t expecting this coming into this round, and it’s been a superb championship. The cars are so evenly matched and that is proven by the closeness of the battle this weekend, with sometimes three cars separated by just a few seconds. Now I’m looking forward to more battles in Cork.”