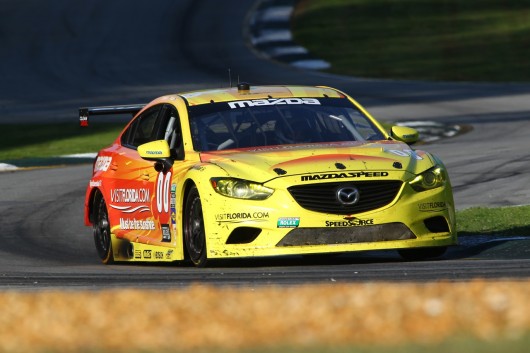 Mazda’s new Mazda6 is having racing success in the Unites States of America. After six races Mazda is now just four points behind Porsche for the Grand-Am GX Manufacturers Championship.The two SpeedSource cars are second and third in team points, while Joel Miller is second among drivers, 14 points behind Jim Norman. There are six races remaining to determine the champions, including Mazda’s ‘home race’, September 7-8 at Mazda Raceway Laguna Seca. The next race is the Sahlen’s Six Hours of the Glen on June 30th at Watkins Glen.

The all-new SKYACTIV-D Clean Diesel engine in the all-new Mazda 6 is a true production based engine. The engine is 51% standard by parts count, and 63% standard by weight. Mazda chose this path as it is the most honest way to demonstrate the quality, durability, and reliability of Mazda cars. To win the championship in the cars first year racing is usually unheard of but history could be in the making!