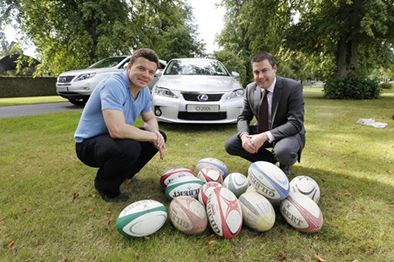 Lexus Ireland is delighted to reveal that Brian O’Driscoll will continue in his role as Lexus Brand Ambassador beyond this year’s Rugby World Cup.  The Ireland Captain has agreed a five year deal with the prestigious car brand that will continue the long standing relationship until 2016.

Brian has been a Lexus ambassador for over eight years.  In that time, he has driven a number of Lexus models including IS250, ISF and GS450h, and currently drives a Lexus RX Hybrid.  Brian took time out of the Irish team’s last minute preparations at Carton House to announce the five year partnership and to test drive the new compact luxury hybrid, the CT200h.

Commenting on the new announcement, Kevin O’Reilly, Operations Manager, Lexus Ireland said;
“We have had a long and beneficial partnership with Brian for most of his professional career and are delighted to extend that relationship.  Brian has become an iconic figure in Irish Sport and as he departs for New Zealand tomorrow I would like to wish him and all his team mates  the very best of luck in the World Cup next month”.

Demand for Lexus Hybrid vehicles continues to grow in Ireland and as petrol prices continue to rise, drivers are looking to reduce running costs on their vehicles.  Without compromising on luxury or performance, the new Lexus CT200h, the worlds’ first full hybrid luxury compact delivers an outstanding 89 g/km CO2  and road tax of just €104.