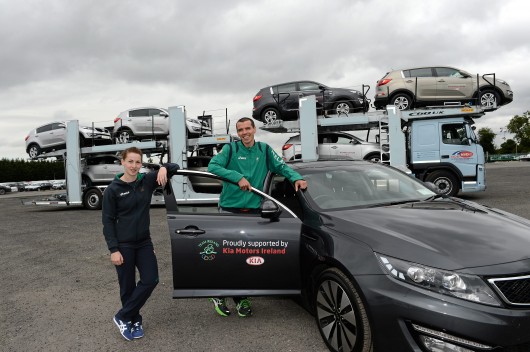 Team Ireland will be cruising around the streets of London in stylish Kia models at the upcoming Olympic Games. Kia Motors Ireland is supplying a fleet of Kia Sportage and Optima models to London for Team Ireland to use for transporting themselves around the various locations during the Games. The cars will be based at the Team Ireland’s training camp at Lensbury/St.Marys in Teddington. One of the Kia Sportages will be based in Weymouth for the Sail team who will be based there. Commenting on the car’s departure for London was Pat Hickey, President Olympic Council of Ireland, he said: “Driving this fleet of Irish registered 12D cars will give the Irish Team a unique identity in London and we are delighted and thankful for the support of Kia Motors Ireland in this regard”.