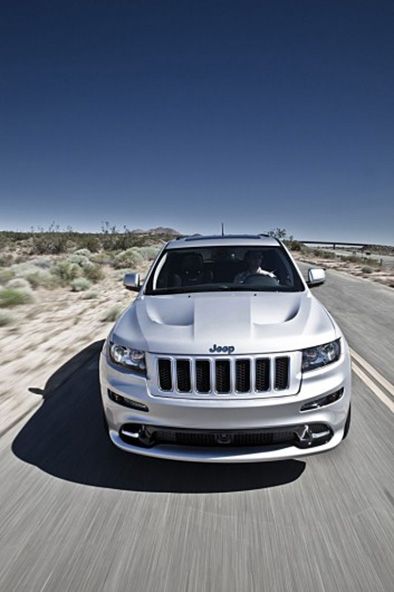 Jeep’s impressive flagship makes it European debut at the 2011 Frankfurt Motor Show. The most powerful and technologically advanced Jeep vehicle ever, the Grand Cherokee SRT8 boasts a 6.4-litre Hemi V8 engine which delivers a whopping 470hp and 630Nm of torque to the tarmac via a five-speed, paddle-operated automatic transmission and a specially-tuned all-wheel drive chassis.

0-100km/h takes just 4.8 seconds and its top speed is 255km/h but thanks to huge six-piston front and four-piston rear Brembo brakes the Jeep Grand Cherokee can come to a complete stop from 100km/h in just 35m.

The Grand Cherokee isn’t just Jeep’s fastest ever vehicle, however – it’s also its best handling. Using the Selec-Track controls, the SRT8’s handling and performance characteristics can be altered depending on the driving situation, with five different setting for the stability control system, adaptive damping, transmission shift strategy, Electronic Limited Slip Differential (ELSD), throttle control and cylinder de-activation system and in its most potent ‘Track’ mode, the Jeep Grand Cherokee is capable of generating an astonishing 0.90g of cornering force on the skid pan.

Jeep is also introducing a new 3.6-liter Pentastar V6 petrol engine that will power the 2012 Jeep Wrangler and Jeep Wrangler Unlimited. Producing 284hp and 342Nm of torque, the new transmission is available with a six-speed manual or a specially recalibrated five-speed automatic transmission. There are no plans at this time to offer the engine in Ireland.

Ireland will get the special edition Jeep Wrangler Arctic model, however, which also makes its European debuts at the Frankfurt Motor Show. Based on the Jeep Wrangler Sahara, the Arctic’s winter theme includes white and silver paint schemes, badges and decals that feature the Yeti, the mythical snow creature of the extreme North, as well as black 17-inch wheels with all-terrain tyres, special seat fabrics and heated seats. Available in Limited and Unlimited (four-door) guises, the Arctic is powered by a 200hp, 2.8-litre turbo diesel engine and goes on sale in the first quarter of 2012.