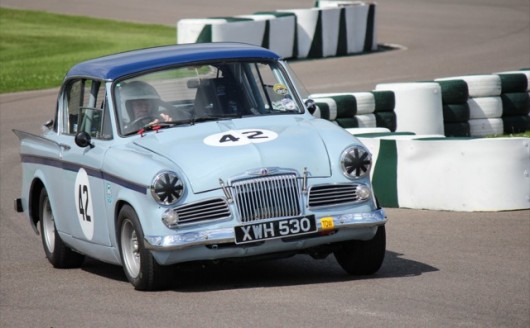 This weekend will see Irish born racer Derek Daly return to the UK and take part in the world’s premier historic race meeting, The Goodwood Revival, 14thto16th September. Ex F1 driver Derek will be sharing Coleraine born Harry Sherrard’s 1963 Sunbeam Rapier in the St Mary’s Trophy, a two-part race for saloons built in the 50’s and 60’s the genesis of touring car racing.

The format will be a celebrity race on Saturday, with the car owners taking their turn on Sunday, and the result declared on aggregate. The capacity crowd are expected to see a thrilling and close-fought battle between such diverse and classic cars as Alfa Romeo Giulietta, Austin A35, Ford Zephyr, Jaguar MkI, MG Magnette, Morris Minor and Standard 10. It is hoped that the car will still be competitive as it was in its heyday, as it proved to be a very successful race and rally car and when originally sold was even endorsed by follow F1 driver Sir Jack Brabham.

Interestingly Sherrard an ex Coleraine Inst pupil chose his guest driver Derek because as a teenager growing up in the late 70’s and early 80’s he followed his career. Harry would cycle to his local newsagent on a Friday morning to collect his copy of Autosport and read how Daly had got on the previous weekend.

Sherrard recently commented that he loved the story of how Daly had worked in the iron ore mines in Australia to fund his racing, and literally worked his way up to Formula1. “When the invite arrived to race at Goodwood, i traced Daly down to the US and called him. He was immediately enthusiastic, and accepted my invitation to race with me, subject to Lord March’s approval, which was forthcoming.”

Daly will also be making a timely return to Goodwood as his first taste of the circuit was in a Formula One car in 1977 when he tested the new Theodore and commented “ I have since then followed the revival meeting with great interest because of the calibre of cars and drivers it attracts. When an event goes to such trouble to have just about everything in period style and look it just captures the imagination and when I was offered the opportunity to drive this year i had to jump at it. It will be the first time that I’ve raced since I retired in 1992.”

“ I tested it on Thursday before the British Grand Prix and all is well. Having watched past races on DVD I’m a little surprised how hard the cars are driven. I’m very much looking forward to the race and the festivities that seem to get better and better each year.”

Daly and Sherrard will face stiff competition from the assembled grid of International motorsport royalty and close to home from Belfast born Martin Donnelly. The ex F1 driver will also be driving a Sunbeam Rapier. Further information on the team can be found at www.rapierracing.co.uk