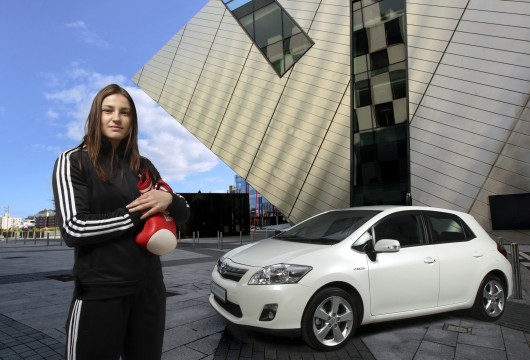 Ireland’s triple World and five-time European Amateur Boxing Champion, Katie Taylor, received the keys to her new Toyota Auris Hybrid. Katie has been a Toyota brand ambassador since 2010 and commenting on her new car she said: “Not only do I love the look of the Auris Hybrid, but as a person with a strong interest in the protection of the environment for future generations, I also love the fact that I’m driving a car that was created with the future of the environment in mind. It’s also an incredibly quiet and comfortable car, which makes for a really relaxed and stress-free driving experience.”

Toyota Ireland’s Marketing Operations Manager, Ian Corbett commented: “Since her first major win at the 2005 European Championships, Katie has been a hugely popular champion and is an outstanding role model. We think she’s the perfect ambassador for the new Auris Hybrid. Toyota Ireland would like to wish Katie the very best of luck in her future career.”