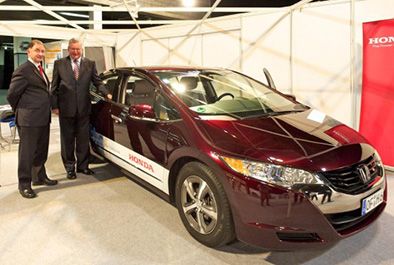 Honda’s hydrogen powered car, the FCX Clarity made a star appearance in Scotland this week at the World Hydrogen Technologies Conference in Glasgow, where more than 150 experts from around the world discussed the future of clean energy with hydrogen power playing a key role.

Honda’s FCX Clarity is the ultimate solution to pollution free driving. It is fundamentally an electric car with hydrogen creating the electricity onboard through a ‘fuel cell stack’. The stack creates the electricity from a reaction between hydrogen and atmospheric oxygen. This reaction has only one emission, pure water which comes out of the tailpipe in the form of vapour.

Refuelled from empty to full in less than four minutes, the FCX Clarity drives and handles just like a petrol car and has a range of 288 miles. Top speed is more than 100 mph and with ample space for adults plus luggage.

The car is already being leased in America and Japan, as there’s an emerging infrastructure to support hydrogen-powered cars in those countries. Introducing a fuel cell car requires the development of similar refuelling stations.  To address this in the UK, Honda, in cooperation with BOC and Forward Swindon (the economic development agency for Swindon Borough Council) – are launching the UK’s first public hydrogen refuelling station at Honda’s Swindon car plant, on September 20.

This has to be one of the most exciting potential fuels for future motoring, it will be interesting to see how the price works out for the vehicles and the fuel. Watch this space!