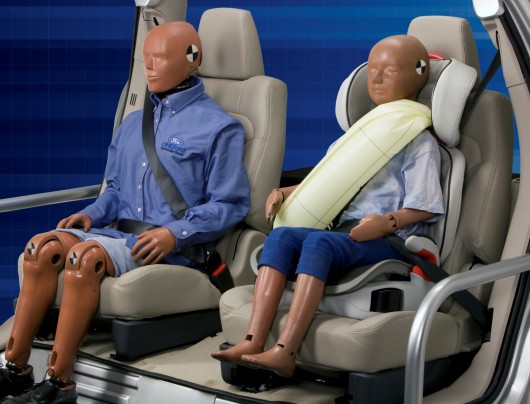 Ford will be debuting its new inflatable rear seatbelt on the new Mondeo, due for launch next year. The inflatable seatbelt is designed to reduce hear, neck and chest injuries for rear-seat passengers. In the event of an accident, the seatbelt rapidly expands to disperse crash forces across a body area five times greater than that achieved by a conventional seatbelt. This technology was first introduced in the U.S. on the 2011 Ford Explorer as an option, with 40 per cent of customers choosing the option. As with an airbag, Ford’s inflatable rear seatbelt is activated when crash sensors detect an accident. This forces compressed gas out of a cylinder housed below the rear seat, through the buckle and into the belt. The inflatable rear seatbelt is fully deployed in less than 40 milliseconds. The new Mondeo will be the first vehicle in its class to offer this technology.