Ford’s first global performance car will take centre stage next year with a starring role in new film blockbuster The Sweeney. Flying Squad detectives Jack Regan (Ray Winstone) and George Carter (Ben Drew aka Plan B) will lead a cast of crime-busting officers as they give chase to London’s criminals in black Ford Focus ST hot hatchbacks. Thanks to the Ford Focus ST’s 2.0-litre 250PS four-cylinder EcoBoost engine and explosive acceleration, the criminals will always struggle to make a clean getaway.

The new Ford Focus ST, which goes on sale in 40 countries from next year, was shown in final production-ready form at the Frankfurt motor show in September. Anthony Ireson, Ford Britain marketing director, said: “The new Focus ST is a hugely exciting car for Ford with terrific dynamic credibility. It will be a car for real driving enthusiasts, so Regan and Carter won’t be disappointed.”

Last month special early-build Ford Focus ST models were secretly delivered to The Sweeney set, joining Ford Mondeos, Galaxys and Transits also being used as unmarked vehicles. Director and co-writer Nick Love, whose prior films include The Football Factory and The Firm, said: “It was important for me to collaborate with Ford on The Sweeney as their legacy with the original TV show is so strong – they’re the perfect partner. I like the Ford Focus ST so much, I want one! Ford’s strong link with the 1970s Sweeney TV series saw Regan, Carter and their Flying Squad colleagues using a string of Ford Granadas, Consuls and Cortinas to make the streets of London a safer place.

Production company Vertigo has the use of six Ford Focus ST models during filming, which is continuing until Christmas. Set in modern day England, The Sweeney movie also features Hayley Atwell (from Captain America), Damien Lewis (The Escapist), Steven Mackintosh (Underworld: The Rise of the Lycans) and Paul Anderson (The Firm). Next year The Sweeney will be edited ahead of the Focus ST going on sale in the UK in the summer, followed by the film premiere in September. The dates for the Irish launch of the Focus ST are yet to be announced. 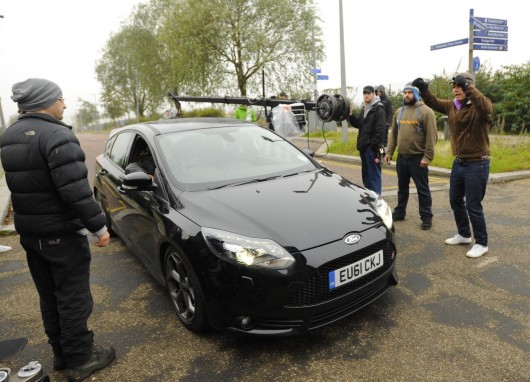