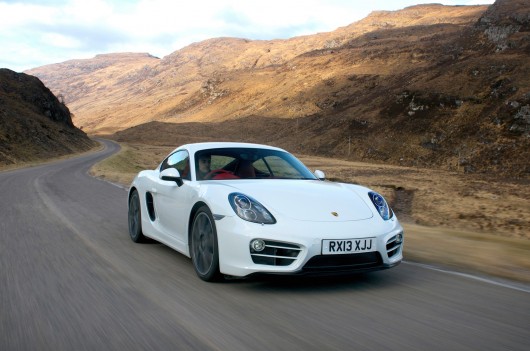 The Porsche Cayman has previously been viewed by some as a poor relation to its elder sibling, the 911. This all-new third-generation Cayman firmly proves that the Cayman is an exceptional two-seater, mid-engine sports coupe that’s rightly strong enough to stand on its own laurels. Porsche first introduced a two-seater, mid-engined sports coupe back in 1953, with the launch of the Porsche 550. They’ve proved the capability of this engine and chassis configuration, with 15 of their 16 Lemans 24Hour race wins coming from mid-engined cars.

The exterior of the new Porsche Cayman is now more muscular and focused, it benefits from its own doors, having previously shared the 911’s. They have sculpted recesses which aren’t just for aesthetics, they are purposeful too, directing airflow in to the engine. Through the extensive use of lightweight aluminium in the car’s construction, overall weight has been reduced by as much as 30 kilograms. Another key benefit of this is the 40 per cent increase in torsional rigidity. The Cayman’s wheelbase has been lengthened by 60milimetres and the track widened by 40 millimetres, with the overall height reduced by ten millimetres over the previous generation. These fundamental alterations result in improved stability and cornering suppleness. 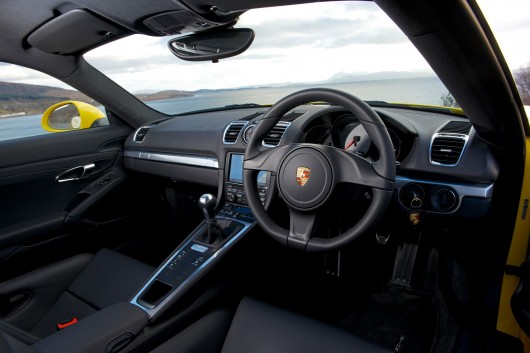 The Cayman is available across two variants, the Cayman and Cayman S. The Cayman’s engine size has been reduced to 2.7-litres (previously 2.9-L), with a hike in power by ten horsepower to 275hp and 290Nm of torque. The more powerful Cayman S comes fitted with a 3.4-litre flat-six boxer engine that develops 325hp and 370Nm of torque, an increase of five horsepower. Both models come equipped with a six-speed manual transmission as standard, with Porsche’s twin-clutch PDK automatic transmission available optionally.

The standard level of specification has been increased on both models, with an increase in wheel size too, the entry-level Cayman comes fitted with 18” alloy wheels, with 19” alloys fitted to the Cayman S. The interior’s now benefit from the standard fitment of a 7” touchscreen control interface which sits neatly in the centre console. There’s also a 4.6” colour display incorporated into the driver’s instrument cluster. You can easily toggle through various displays such as the trip computer and view navigation maps and guidance. The fit and finish of the interior is completed to the same plush standard found in Porsche’s high-end models, with precision-engineered quality switchgear evident throughout. 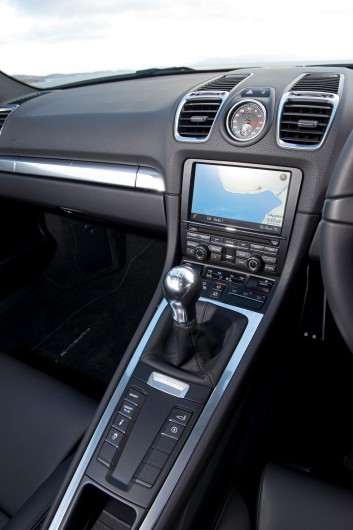 On the road, both Cayman’s demonstrate immense all-round grip, despite driving on some of Scotland’s highest roads in freezing conditions on our test route, the Cayman never once felt anything other than surefooted. The cornering ability of the car never fails to impress, with tons of front-end grip on turn-in. The steering is accurately weighted on the heavy side, this provides you with instant feel and a connection with the road wheels. The Cayman is a driver’s car and will reward on the open road. 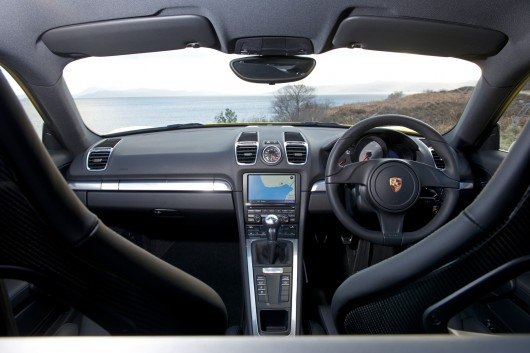 One of the optional pieces of equipment I’d certainly choose is the Sports Chrono package. This incorporates dynamic transmission mounts, these offer more precise handling and feedback when cornering. When sport plus is selected with a manual transmission, there is an auto-blip feature installed. The car will automatically ‘blip’ the throttle when you downshift, it’s effectively doing a heal-and-toe manoeuvre for you, and something I would normally do myself. I was sceptical at first, however in reality it’s a clever piece of technology that certainly works. The optional twin-clutch seven-speed PDK transmission offers near-instant gear changes and is a must-have for daily commuting. It’s a pity though that Porsche still uses its steering wheel gear-change controls that are different to all other manufacturers, the buttons on the front of the steering wheel select up changes and the ones on the rear select down changes. Thankfully you can opt for two more traditional paddles, with up changes on the right and down changes on the left. There’s a clever launch control function too and it will hold a gear when the stability control is turned off to allow you hold a drift, not to be tried on the road of course. Personally, I’d opt for the six-speed manual transmission finding it to offer a greater level or driver engagement on the road.

There’s an obvious power hike in the Cayman S, most notable is the additional torque available. From low revs there’s instant response to throttle inputs where a down change may be necessary to extract acceleration in the standard variant. Nonetheless, once you climb over 4,000 rpm in the Cayman there’s sufficient power to achieve licence-losing speeds in just a few seconds. For over ninety per cent of the time I believe the entry-level Cayman will satisfy all needs, it’s over €15,000 less then the Cayman S with prices commencing from €68,460, so you’ll be saving yourself a few euro too. 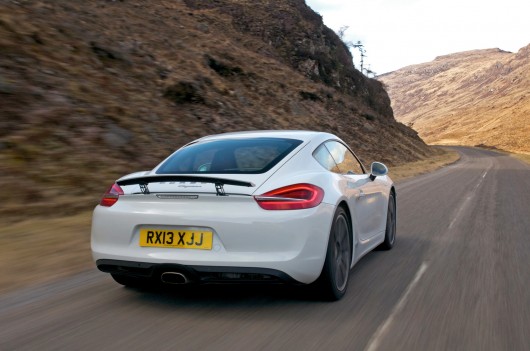 This new Porsche Cayman offers sublime handling, styling and driving characteristics that set it apart from its competitors. Far from worrying about competition from Audi, BMW and Lotus, Porsche may find the Cayman’s strongest competitor within its own stable, the ubiquitous 911. It’s certainly not a poor relation, it now has an identity all of its own. 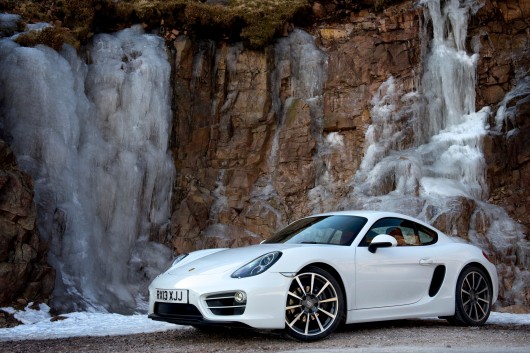