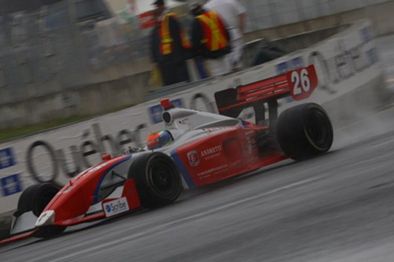 Peter Dempsey certainly provided the entertainment in this past weekend’s Grand Prix Trois-Rivieres in Quebec. The Irish rookie set himself up for the 60-lap event with a third place qualification time of 57.559, just .1 off the pole. The lap time was earned in the final round of this weekend’s knockout style qualifying where the fastest six drivers took the final ten minutes of the session to lay down their quickest possible laps. The efforts saw the top four drivers, Dempsey included, deliver lap times that broke the previous track record held by Simona De Silvestro.

In Sunday’s race, Dempsey unsurprisingly tried for the lead in the rolling start, but ended up settling back into third where he remained for the first two-thirds of the race.It was at that point that the forecasted rainfall started to come down on the street course, calling for a red flagged race and a change to Firestone’s rain tires.

Once the race resumed, the native of Ireland came to life in the slick conditions.Dempsey seemed to be nearly more comfortable driving in the wet, and after barely avoiding a spin-out from second-place Conor Daly, he and leader Esteban Guerrieri surged ahead of the rest of the field in a fight for the win.When the white flag came out, Dempsey gave it all he had, and in what has been coined as “Dempsey-style” racing, the aggressive driver pushed Guerrieri in an exciting and intense battle until the very end. The final curb about 100 meters before the finish line was Dempsey’s ultimate demise; as he spun out and stalled the car, Guerrieri continued on to take the win.

Though he didn’t win, Dempsey gladly provided one of the most thrilling endings to a Firestone Indy Lights race in history and still was able to restart his No. 26 Andretti Autosport car in time to cross the finish line in fifth position.

“It was a great event at Trois-Rivieres”, commented Dempsey. “I really enjoyed driving the Firestone Indy Lights car around this track. I feel like both Andretti Autosport and I made some great improvements over the weekend, and we really pushed hard for both the pole and the race win. It was the closest I’ve been to pole this season, and every time I drive the car I feel more comfortable.

“The race was pretty tough.I got a good start and went for the lead, but I realized it was a long race, and it was more sensible to settle into third at that point. I didn’t quite have the pace for the leader, but once the rain started falling, I felt there was going to be a good chance for me to push for the win. The car handled fantastically in the slippery conditions, and I was going to do whatever I could to give the guys a race win.I came close, but unfortunately, I made a mistake at the last corner and ultimately brought the car home in fifth. I’m certainly not one that settles for second place. A win was my main priority, and I will always go for that.”

“I’d like to thank my sponsors and supporters, Motorsport Ireland, Scribe Healthcare Technologies, and my other personal sponsors as well. A special thank you goes out to all the guys at Andretti Autosport. I really think we had a fun and enjoyable race weekend.”

Peter will race again for Andretti Autosport on the Streets of Baltimore on September 4. The 12-turn, 2.4-mile course surrounding two of the city’s downtown landmarks “the Inner Harbor and Oriole Park at Camden Yards” will be the setting of the inaugural Baltimore Grand Prix.To follow Peter’s progress in 2011, go to www.peterdempsey.com and www.indycar.com/roadtoindy.