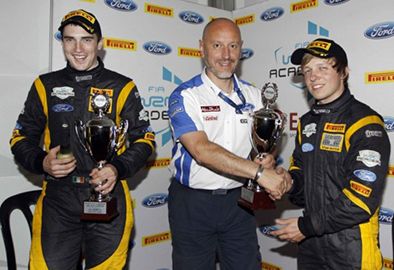 Ireland’s Craig Breen claimed the biggest win of his career by taking his maiden win in the FIA WRC Academy Championship on Saturday evening, after a final stage showdown on ADAC Rallye Deutschland. Twenty-one year old, Breen was embroiled in a rally long battle with Spaniard Yeray Lemes and triumphed by 15.1 seconds following a tense fight that went all the way to the final stage. “That was absolutely incredible,” said Breen at the end of the final Arena Panzerplatte stage, “I was absolutely on the limit and I have to thank Yeray for pushing me that hard. There was no way I was going to be beaten again so I went on maximum attack.”

Breen had the taste of victory within his grasp on the previous event in the championship on WRC Finland but was thwarted on the final stage by Estonian Egon Kaur. The Waterford man was not to be denied this time out however and this win underlines his talent by being the only driver in the WRC Academy Cup to have been an event leader on each of the four rounds to date. Breen’s points haul narrows the gap in the WRC Academy Championship overall standings, Egon Kaur still leads with a total of 92 points but Breen has now moved on to 66, with two rounds remaining. The next event takes place in France at the end of September and is again on tarmac. Then the final rally of the season is based in Wales in November on World Rally GB.

The Championship moved to asphalt for round four in Germany and the battle for supremacy on tarmac got underway on Friday with six stages. Tarmac specialist Yeray Lemes (ESP) set the pace on the opening day. The Canary Islandertook four stage wins and held a 36.2s lead as the cars return for the overnight halt. Breen, who started the event joint second in the title standings with fellow Pirelli Star Driver Brendan Reeves, was a strong second, recording fastest time on stage four and being second fastest on three of the days tests. “It’s gone well so far,” said Breen, but the over night gap could have been closer; we hit the side of the car on the last stage and bent two wheels. Tomorrow is another tough day, including the famous Panzerplatte stage.”

Day two totaled 8 stages involving a double loop of four tests. Lemes started proceedings by extending his lead to 39s on stage seven. Then on the follow stage ( Special Stage 8 ) the rally swung in Breen’s favor as Lemes had a minor off costing him 55s. “I missed a left-hand junction and we couldn’t reverse onto the road because we were down from the road and the grass was wet,” said Lemes.

This elevated Craig into the lead by a margin of 16.2sec. Breen then extended his advantage to 17.9 on SS 9, only for Lemes to cut the deficit back to 12.1 as the crews entered midday service.

The afternoon was made up of a rerun of the morning’s stages and on SS11 the nail biting started as Lemes set another fastest stage time and gap between the two front-runners was down to 6.2sec. At the end of that stage Craig did state that his brakes were sticking but he hoped to be able to continue the fight over the remaining three stages.

On stage 12 Breen set the pace and pulled out the lead to 10.9. So to the penultimate test and Lemes setup a final stage showdown by going fastest. He was 1.3 ahead of the Irish driver and the gap was now 9.6s

SS14 and the 34km’s of the famous Arena Panzerplatte lay before Craig and his first win in the WRC Academy. Over the initial splits the two were neck and neck, then Yeray pulled out a one second lead, but over the final sectors of the stage Breen edged out 5.5sec to record an amazing win, his final margin being 15.1sec.

Craig will travel to the Czech Republic directly from Germany for the Barum Czech Rally Zlin, where Craig will drive his Keltech Engineering Ford Fiesta S2000. The three-day event starts on Friday next and the Irish driver is seeded 20th but for now Craig can bask in the glory of his first win in the WRC Academy.