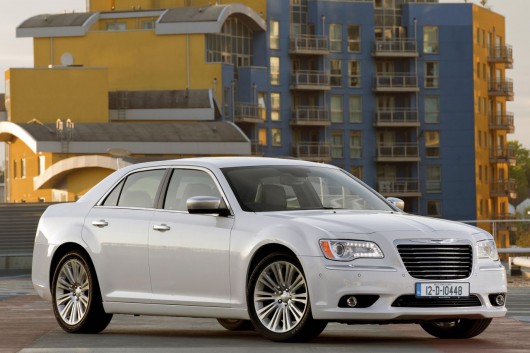 Chrysler’s original 300C made quite an audacious statement with its brawny appearance, it’s since been updated with this fresh version, which still has a road presence that demands attention. There’s no changing its hefty American-style executive saloon facade, albeit it now benefits from a slightly softened look, aided by the LED daytime running lights and all-new bodywork. The windscreen has a sharper rake then its predecessor giving it a sportier look, whilst the rear benefits from an integrated boot spoiler and re-designed tail lights.

The alterations haven’t been solely to the car’s bodywork and interior, under the bonnet has seen significant changes too. The Mercedes-Benz diesel engine that powered its predecessor has been replaced with a new 3.0-litre turbo-charged unit, developed by Fiat Powertrain and VM Motori. It’s a worthy successor, delivering a very respectable 239hp and a vigorous 550Nm of torque. This power is fed to the car’s rear wheels through a five-speed automatic transmission that’s fitted as standard. It might be as much as three gears less then some of the units fitted to its German competitors, nevertheless it works perfectly in all conditions. There’s ample power accessible throughout the rev range, although accessing it requires a stretch of your right foot as there’s a fair degree of travel on the accelerator pedal. Getting from A to B in the fastest time isn’t what the 300C is about, it excels at cruising at motorway speeds offering a cushioning ride from its suspension that’s tuned more for comfort then for dynamics. The BMW 5 Series and Audi A6 will outperform the 300C in the handling department, they are more fine-tuned for driver involvement. The 300C won’t shy away from twisty sections of country roads either, but you don’t feel confident pushing it on, it prefers to take things at a slightly more leisurely pace, it rewards best when not put under pressure.

The 300C offers an abundance of luxury and equipment that’s far ahead of its rivals in terms of price. The €57,995 entry-level Limited model comes with items that include leather upholstery, heated front and rear seats, 18” alloy wheels, a power adjustable heated steering wheel, keyless go, cruise control, climate control, a touch-screen infotainment system with a 30GB hard drive and integrated Garmin satellite navigation and Bluetooth connectivity as standard. My test car was the high-end Limited version, this comes equipped with just about everything you could need in a car, on top of the standard specification this model receives a dual-pane panoramic electric sunroof, 20” alloy wheels and a two-tone Nappa leather trim with a leather-covered dashboard.

The quality of the fit and finish inside the cabin has improved, we were particularly fond of the infotainment system which is easy to navigate through the various menus and setup Bluetooth connections for your smart phone.

Chrysler has fitted a multitude of safety features as standard to the 300C, which no doubt contributes to the car’s EuroNCAP five-star safety rating. Some of the standard safety items on the model we tested include advanced ESP, active pedestrian protection, adaptive cruise control, forward collision mitigation and blind spot detection.

This new Chrysler 300C has closed the gap between itself and the premium German executive saloons. It might not have superior chassis dynamics, but they aren’t meagre either, it offers an unsurpassed level of comfort and refinement, combined with quality that makes it deserving of consideration for those in the market for such a car. If you haven’t driven one yet, then I’d highly recommend taking one for a test drive soon.