This coming weekend sees the running of Cannonball 5 sponsored by Manhattan Popcorn, which will see 160 supercars take on an organised road trip around some of the most scenic parts of Ireland. With the likes of Lamborghini, Ferrari, Aston Martin, McLaren, Porsche, Masseratti, Rolls Royce and Bentley having a presence, it’s set to be a spectacular event for all car enthusiasts.

Cannonball 5 will start this Friday morning the 23rd August at Mondello Park race circuit in Co. Kildare. 2 FM will be on site with Ryan Tubridy broadcasting live from the race track as the supercars take to the track before departing the circuit at 12:30. CANNONBALL 5 will raise money for Laura Lynn which supports children with life limiting conditions and their families by providing high quality transitional care, home support, respite, crisis and end-of-life care. The star-studded convoy includes some of Irelands best loved celebrities.  An Taoiseach Enda Kenny has even stepped up to drop the Cannonball Flag. World Famous chart topper BRUNO MARS has joined Boyzone’s Shane Lynch who is signed up for his fifth Cannonball along with former Miss World Rosanna Davison and boyfriend Wes Quirke whilst celebrity chef Rachel Allen, The Voice Presenter Kathryn Thomas, TV3’s Elaine Crowley and RTE’s Miriam O Callaghan have also had a Cannonball pit stop or two.  Models Georgia Salpa, Aisling Quinn, Hazel O Sullivan, Emma Quinlan and Holly Carpenter have been keen Cannonballers over the years and this year Roz Purcell, Nadia Forde, Kerri Nicole Blanc and Rachel Wallace will set temperatures soaring in the Tan Organic Car.  Republic of Telly star Andy Quirke, Rugby Ace Mick Galway, 2FMs Ryan Tubridy, and Jennifer Maguire are also gearing up for Cannonball 5 so 2013 will not disappoint in the celeb stakes.

CANNONBALL 2013 consists of 3 action packed days taking in some of Ireland’s most scenic routes.  On day one, the cars will leave Mondello Race Track in Naas, Co Kildare at 9am and arrive in Abbeyleix in county Laois for a lunch stop. The next CANNONBALL pitstop is Ballymaloe House in Middleton before the gleaming convoy arrives in Cork at 6.45pm and makes its way through Patrick St, which will be closed for the event, to the Port of Cork with a reception at Gatley’s Boardwalk Bar and Grill.  On Saturday August 24th, CANNONBALL leaves Cork at 10.30am to take in a stunning drive through Bantry, Kenmare and Killarney and arrives to Limerick at 5pm. On Sunday morning Cannonballers will leave Limerick at 10am and go to Killaloe for a very special Gathering of the ‘Men of the Water’.  From there the cars will move on to Cashel in Tipperary at 1pm where they will close a Cannonball Festival before descending on Tullamore in County Offaly at 6pm for the finish line with the 2FM Roadcaster where the roars of the engines will compete with a cheering crowd of over 10,000 people and a 2 day music festival. 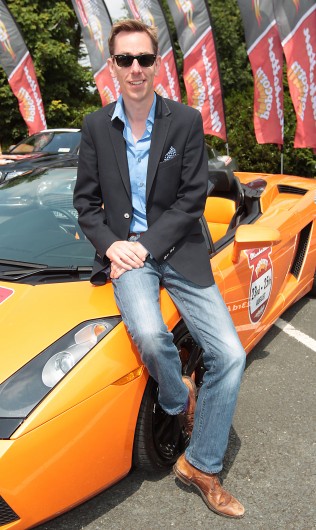