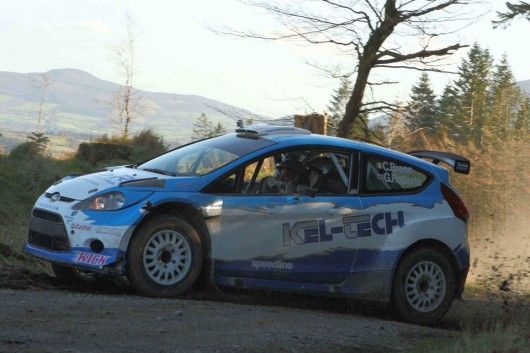 After competing on Tarmac for the previous three events it’s back to gravel or depending on the weather, MUD!, for next weekend’s IRC, Rally of Scotland for Craig and it’s also a return to Four Wheel Drive as the Irish driver jumps back into his Kel-Tech Engineering Ford Fiesta S2000. Craig recorded a wonderful 7th overall in the Czech Republic at the Barum Czech Rally Zlin and the Irishman will be concentrating on repeating that performance in the Scottish forests.

Both Craig and Gareth were very disappointed after crashing out of WRC Rally France when leading the WRC Academy penultimate round. They had made the perfect start over day one and were working on continuing that form over the Saturday stages. It’s a fine line that competitors thread in rallying and just one mistake can spell disaster. Unluckily that’s what happened last Saturday morning to the Irish/Welsh crew. Over the last three year’s Gareth has been one the main reasons why Craig has achieved so much. Just one kilometre from the end of stage ten, on the approach to a left hander, Gareth was late with a note and Craig was to fast into the corner. The result was a broken drive shaft and the pair were out, Gareth was devastated. The accident underlines how rallying is not just about the driver. It’s a driver and co drover combination that achieves each result and the Craig/Gareth combination have accomplished alot over the passed three years. The pair will use next weekend’s Rally of Scotland and the following WRC Spain which they will also contest in the S2000 to get back on track before the final FIA WRC Academy showdown on Wales Rally GB.

RALLY SCOTLAND: The event gets underway with two runs through the Carron Valley stage on Friday night (7 October) following the ceremonial start at Stirling Castle. Carron Valley, which measures 8.36 kilometres in length, uses forest roads around Carron Reservoir close to Stirling and will provide an early test for the IRC crews, who will tackle the stage in the dark.

Saturday’s itinerary features three repeated stags in Perthshire: Craigvinean, Drummond Hill and Errochty. The finishes of Craigvinean and Drummond Hill have both undergone minor changes for 2011 with the last two kilometres of Craigvinean featuring several high-speed crests, while the second Drummond Hill run will be held after dark. The two passes through Errochty will be shown live on Eurosport and are set to attract an audience of millions around the world.

The county of Stirlingshire will host Sunday’s action. Following a third visit to Carron Valley, competitors will tackle two runs of the Loch Chon and High Corrie stages, which include sections of the old Loch Ard test, before the event draws to a close at Scone Palace where two short stages will be held prior to the ceremonial finish. Scone Palace, on the outskirts of Perth, is where kings of Scotland were crowned in centuries past.

On both days the permanent service park will be housed at Perth Airport although a remote service will be available in the town of Callander on Sunday to reduce the total liaison distance for the competitors while providing welcome respite following the first 25.81-kilometre High Corrie test, both runs of which will be covered live on Eurosport.

All crews competing on RACMSA Rally of Scotland will be eligible for the Colin McRae IRC Flat Out Trophy, which is presented to the driver whose performance best embodies the spirit of the rallying legend.