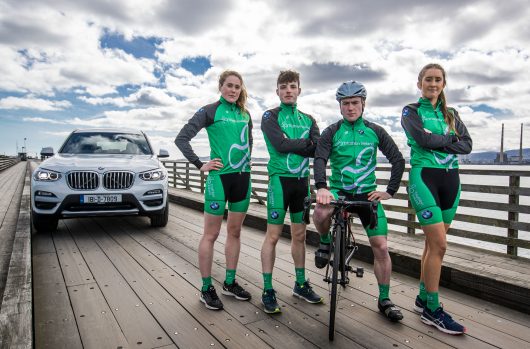 The deal includes a substantial investment (one million euro) over the duration of the sponsorship, which will support the Organisation to make the Triathlon and Duathlon more accessible to people of all abilities and backgrounds in every part of the country.

Ireland has the fifth highest participation rate (per head of capita) in Triathlon of any country in the world, while this year alone, more than 70,000 people will participate or watch a triathlon event on the island of Ireland.

This summer, more than 10,000 people will compete in the BMW Triathlon National Series – a nationwide league of 17 races which take place around Ireland between May and September.

The vast majority of these people will be amateur participants: men, women and teenagers seeking to challenge themselves and achieve something extraordinary. Competitors need to compete in four races to qualify for a ranking in the BMW National Series with awards presented in five-year age groups. Within the National Series, women between the ages of 40 and 44 across the country are only competing against women of their same age. Last year the youngest competitor in the National Series was just 16 while the oldest raced in the men’s 70-74 years age group.

From 2019 BMW and Triathlon Ireland will launch an exciting and competitive Corporate Series to encourage companies help their employees towards greater health and fitness.

This is in-line with the Governments National Physical Activity plan (2016) to promote workplace wellbeing. The World Health Organisation considers workplace health programme’s as one of the ‘best buy’ options for prevention and control of non-communicable diseases and for mental health. The promotion of physical activity in workplaces can provide benefits include higher rates of employee retention, reduced absence due to ill health and increased productivity. Employees benefit through lower incidences of health problems, reduced stress and improved mental health. International studies show a three-fold return on the investment for businesses.

Commenting on the sponsorship announcement Paulo Alves, Managing Director BMW Ireland Group said: “The partnership with Triathlon Ireland is a hugely exciting development for BMW in Ireland. At the core of our brand is a notion to make every second count, whether in a professional, personal or sporting sense so we are very excited to come on board and further support the development of the sport here in Ireland”.

Triathlon Ireland Chief Executive, Chris Kitchen believes BMW are a perfect match:  “We share common values and strive to provide perfection in our own fields. We will be working hard with BMW to ensure a mutually beneficial relationship develops and flourishes over the sponsorship’s duration.”

Mr Kitchen continued: “Triathlon is one of the fastest growing sports in Ireland and has moved from a niche sport to a mainstream one with over 18,000 members and an ever increasing reach. The relationship with BMW will provide significant extra income to help us grow and accelerate the development of the sport further. Both organisations are ambitious and goal focussed and the injection of additional funds and the value in kind will help enable us to not only achieve but exceed the aspirations within our Strategic Plan.”