2013 marks a milestone in BMW Motorrad’s history as they celebrate 90 years since they produced their first production motorcycle in 1923. They’ve progressed throughout the years with the introduction of numerous new models, along with notable advances in technology. BMW Motorrad (BMW’s motorcycle division) was the first motorcycle manufacturer to introduce ABS for motorcycles in 1988. It was an optional extra at the time, however as and from January of this year all BMW motorcycles come equipped with ABS as standard, if you ride a motorcycle (especially in Ireland) you’ll understand how vital this piece of safety technology is.

It’s 17 years since I rode my first motorcycle, a diminutive 50cc Italian-bred Aprilia, to me it was a superbike and nothing could get in my way, up till 50 km/h at least. Fast forward to the present day and I’m riding a colossal 1,600cc motorcycle that has more technology incorporated then most family saloons. This is BMW’s flagship tourer, the K 1600 GT, built for cross-continent touring, offering both rider and pillion maximum comfort on two wheels.

The K 1600 GT has impressive figures to boast on paper, with 160hp and 175Nm of torque delivered from its 1,649cc six-cylinder engine, an engine capacity that’s more common in a car then on two wheels. Undoubtedly the figures will draw your attention, in reality though is a motorcycle of this size and weight actually practical in the real world, on Ireland’s pot-hole-strewn roads? Over the last eight weeks of riding the GT it’s proven without doubt it’s a competent motorcycle capable of displaying more then one trait, offering an exhilarating ride for solo journeys as well as comfort for touring. 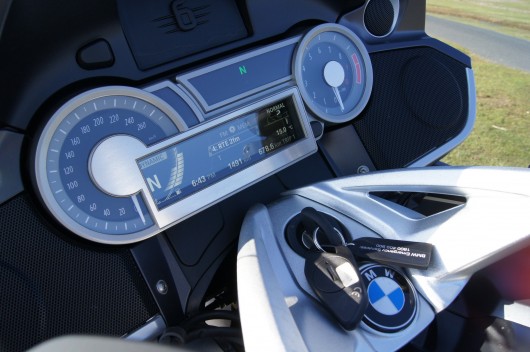 There are two versions of the BMW K 1600 available, the GT and GTL. The GT is a slightly sportier bike, while the GTL has a more relaxed seating position with lower foot rests and a lower seat height. Despite sharing identical frames and engines, the result of lowering the seating position combined with the alterations in the handlebars and footrests radically alters the riding experience. Where the GT exudes razor-sharp responses through the corners, the GTL’s steering can feel somewhat vague at times, with a lack of feel evident through the handlebars. For the long straight highways across the United States the GTL will be in its element, for the Wicklow mountains the GT is my preferred choice. For a motorcycle of this size and weight (332kgs) the GT can execute fast sweeping bends with the precision and poise of a small sports bike. There’s plenty of front-end grip on turn-in with a stable chassis beneath you offering a reassuring ride in all conditions.

With a car-like price tag (From €21,909) you’d expect your GT to have car-like specification and you won’t be disappointed. Just some of the standard features include, a xenon headlight, heated grips, heated seats, LED indicators and colour coded panniers. My test bike has the optional comfort package, this includes BMW’s ESA (Electronic Suspension Adjustment), central locking and an alarm system. Currently BMW Motorrad Ireland is offering this €1,200 comfort pack complimentary with every new GT and GTL purchased. With three riding modes available (Rain, Road & Dynamic), you can set the GT to your own individual riding style, there’s reduced power in Rain mode with full power produced in Road and Dynamic mode, the later having an increased sensitivity in the throttle for instantaneous response. The ESA is an ingenious piece of equipment on a motorcycle of this calibre, it allows you to alter the ride of the bike on the move. You can select from Comfort, Normal and Sport, each offering a different level of damping for varying changes in road conditions and riding styles. 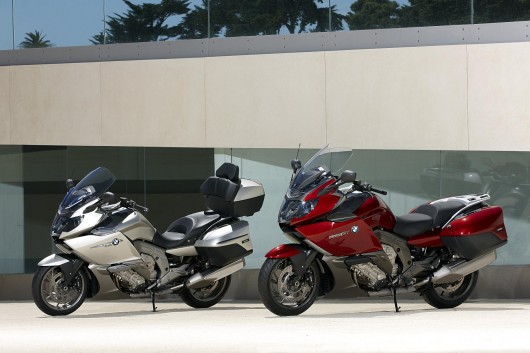 The GT resembles a car in more than engine alone, its on board computer has a multitude of functions. Navigating your way through the various menus is aided by the use of a twist wheel on the left handlebar, it’s not unlike BMW’s iDrive system that you’d use in one of their cars. There’s a regular trip computer for displaying air temperature, tyre pressures, fuel economy and average speed etc. You can also use the twist wheel to tune in to your favourite radio station and select tracks from your ipod or USB stick that can be plugged in. The two side panniers and storage pockets up front can all be locked at the touch of a switch on the handlebar or key fob. The front windshield can be raised or lowered eclectically, below which sits a cleverly-integrated navigation system (optional) that is locked into place when the ignition key is removed.

For solo riding the GT offers plenty of thrills, you’ll never tire of the healthy six-cylinder rasp that’s emitted through the two hefty rear silencers. Conversely to put the GT to the test I recently crossed the Irish Sea on board the Irish Ferries Ulysses for a trip to the Cotswolds in the UK. The good news for fellow Irish motorcyclists is that you can make the short trip to the UK by ferry with ease, thanks to dedicated motorcycle bays onboard both Irish Ferries sailings. We travelled over to Holyhead on the Ulysses, the largest car ferry on the Irish Sea, with capacity for up to 2,000 passengers and crew per sailing. Given the choice of flying or sailing I wouldn’t hesitate in choosing the relaxed atmosphere on board the Ulysses. We travelled in Club Class which for a nominal fee rewards you with comfort for the duration of your stay. There are complimentary refreshments including tea, coffee and minerals, along with newspapers, magazines and free wifi so you can surf the internet or catch up on some work. 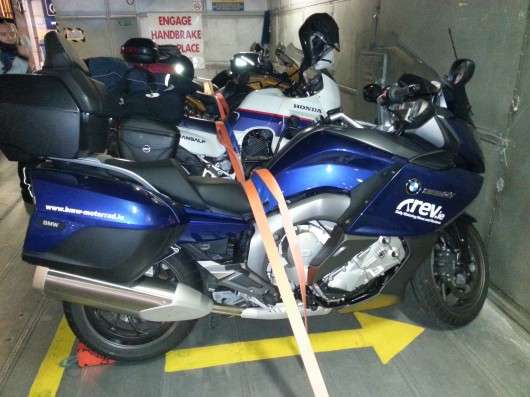 The additional weight of a pillion (my partner) along with her abundant luggage that was deemed compulsory for just three days away, was noticeable at slow speed when manoeuvring through traffic. Once on the move the GT sheds its weight effortlessly, no doubt aided by the copious power reserves on offer, managing to maintain sharp handling along with direct feedback to the rider. We arrived fresh to the Slaughters Country Inn, a tranquil setting in the picturesque area of Lower Slaughter in the Cotswolds, after approximately four and half hours riding along rural roads, far away from the congested motorways that carve their way through the majority of the UK. If you haven’t visited the Cotswolds yet, I’d urge you to make an effort to visit, you won’t be disappointed. The Slaughters Country Inn is a 17th century manor and previously a boys cramming school for Eaton. It’s a striking stone building with beamed ceilings and roaring log fires throughout. Its restaurant and bar offer a sublime range of freshly sourced ingredients on its extensive menu. I’ll be making it my business to return for another stay in this haven of tranquillity. 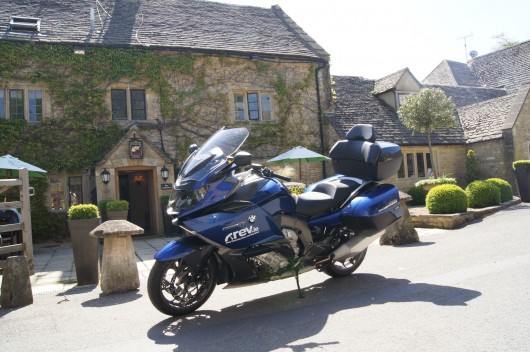 Ninety years on BMW Motorrad has progressed rapidly introducing ever-increasing levels of technology into two-wheeled motoring, yet maintaining the vital connectivity between rider and machine. The BMW K 1600 GT has demonstrated its ability to challenge and surpass it mains competitors, including the ubiquitous Honda ST 1300 Pan-European and Yamaha’s admired FJR 1300.

After eight weeks of riding the GT, it’s managed to impress and demonstrate its versatility with two clear characteristics showing through. It will contentedly tour with two-up along with your luggage, yet thrill the solo rider on twisty mountainous roads. On paper it’s possibly too outsized to excite, in reality it’s an exciting ride.