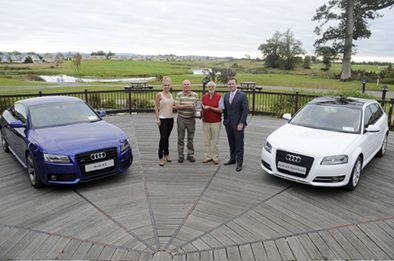 Ian Perrico and Anthony Daly from Waterford have won the Audi quattro Cup final held at the K Club, on Wednesday, 31st August.

The pair won the 21st final of the prestigious golf competition by a single point with a score of 45 points, narrowly beating Matt Donoghue & Ronan Nevin (2nd place) and John & Michael Lucid (3rd place) both of whom had 44.

Perrico and Daly, with handicaps of 11 and 12 respectively, will now represent Ireland in the world final of the Audi quattro Cup which will be held at Mission Hills Golf Club, Hong Kong in November.  This year saw over 280 Audi customers and their guests compete in the regional heats which were played out on some of Ireland’s most prestigious golf courses; Fota Island, Adare Manor, Carton House and The Heritage. The top six teams in each heat then qualified for the final in The K Club.

The Audi quattro Cup is now over 20 years old and has seen in excess of one million Audi customers participate all over the world in the last two decades. This year, almost 90,000 golfers will play in 760 tournaments in 52 countries all over the globe. This has come a long way since German Audi dealers organised an event for 6,000 golfers playing 51 tournaments back in 1991.

Andrew Doyle, director of Audi Ireland said; “Ireland has a rich golfing heritage and the quattro Cup gives Audi Ireland an opportunity to reward our loyal customers to play at some of Ireland’s best courses and then to pit their wits against other Audi customers in some of the world’s best golf courses”.

“The Audi quattro Cup has grown exponentially since 1991 to become one of the biggest participation amateur golf tournaments in the world, spanning over 50 countries and almost 90,000 golfers. I am delighted to be able to reward our loyal Audi customers and it’s a testament to them that the competition grows from strength to strength each year.”