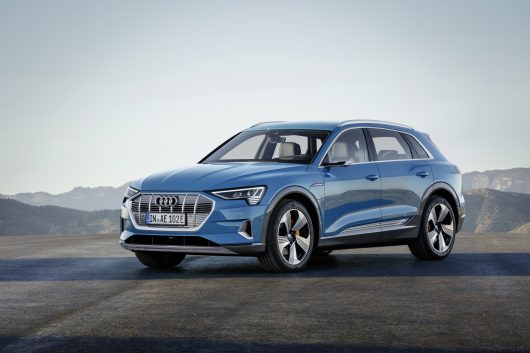 Audi has unveiled its first all-electric series production model, the Audi e-tron in San Francisco. It’s powered by two powerful electric motors that are locally CO2-neutral and virtually silent. A new generation of the quattro drive, the electric all-wheel drive, ensures excellent traction and dynamics. It ensures the continuous and variable regulation of the ideal distribution of drive torques between the two axles – all within a fraction of a second. During more than 90 percent of all decelerations, the Audi e-tron recovers energy solely via its electric motors. The electric SUV taps its maximum recuperation potential in combination with the integrated electrohydraulic brake control system. Audi is the world’s first carmaker to use such a system in an electrically powered series production vehicle. The cleverly designed aerodynamics also contribute significantly to its efficiency. One highlight of this concept is the optional virtual exterior mirrors – a worldwide first in a series production model. Not only do they reduce aerodynamic drag, they also take digitalisation in the vehicle to a whole new level.

From navigation with the e-tron route planner, which displays the driver’s route as well as available charging points along the way, to its Wi-Fi hotspot, the Audi e-tron is extremely well connected. It is equipped with MMI Navigation Plus including LTE Advanced, alongside numerous assistance systems, all of which further help the driver. For example, the standard Efficiency Assist promotes an economic driving style by displaying predictive information and performing automatic recuperation. If Adaptive Cruise assist is selected, the system can also brake and accelerate the electric SUV predictively.

The Audi e-tron will reach customers later this year.