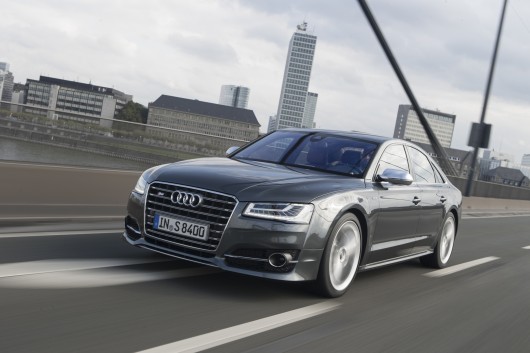 Audi’s fourth-generation flagship saloon, the Audi A8 goes on sale this November prior to its arrival in the New Year. Ahead of its Irish debut, we’ve travelled to Germany to test all variants of the new A8. The full range of A8 models benefit from less emissions and an increase in engine power over previous generations. A8 customers will benefit from a lower starting price (approximately €3,000 less than outgoing model) and an increase in standard equipment, this includes the addition of full LED headlights and a new SE Executive trim level. The reduction in CO2 emissions across the range of petrol and diesel engines will also result in lower road tax fees.

The exterior lines have been subtly tweaked, with a new bonnet, single frame grille, front bumper and new headlights up front. The rear sees newly designed LED tail lights and diamond-shaped tailpipes, along with a chrome strip along the rear bumper. Overall the new A8 has a wider, sportier stance than its predecessor. It’s not just the engines and body that have been reworked, the interior and onboard technology has taken a leap forward in refinement and safety. Among the raft of new features and a world debut in lighting technology is the new MatrixBeam LED headlights, which are available on all variants of the A8. Audi are somewhat of a pioneer when it comes to designing and manufacturing new and distinctive headlights. The MatrixBeam LED headlights have 25 individual LEDs for the high-beam function, through the car’s on-board camera it can automatically switch on and off individual LEDs to prevent the main beam lighting oncoming cars, yet illuminate the areas around the approaching car. It’s an ingenious piece of technology and is safer for both the driver and other road users including pedestrians. 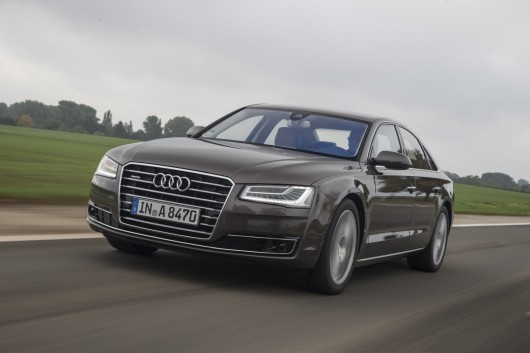 Two diesel engines are available to Irish motorists, a 3.0-litre V6 TDI (from €93,280) and a 4.2-litre V8 TDI (from €116,190). The former will undoubtedly constitute the majority of Irish sales across the range. This 3.0-litre V6 diesel engine offers sufficient performance for the vast majority of motorists. With 258hp and 580 Nm of torque it delivers an ideal mix of performance with the added benefit of economy, it will average 5.9l/100km (47.9mpg) on a combined run. With CO2 emissions of 155g/km, it’s seated in tax band C, with an annual road tax fee of €390. On the road the A8 is comfortable yet poised through the corners, the adaptive air suspension which is fitted as standard copes admirably with undulations in the road, we drove the A8 on German roads the real test to the car’s handling will come when we test it again on Irish roads. We also sampled the 4.2-litre V8 TDI which is a gem of an engine, boasting an impressive 385hp and 850Nm of torque. On German Autobahns we would rate this engine above the sportier S8, purely for the mid-range surge in torque. Back on Ireland’s more sedate motorways and towns, the 3.0-litre TDI is a far healthier proposition. 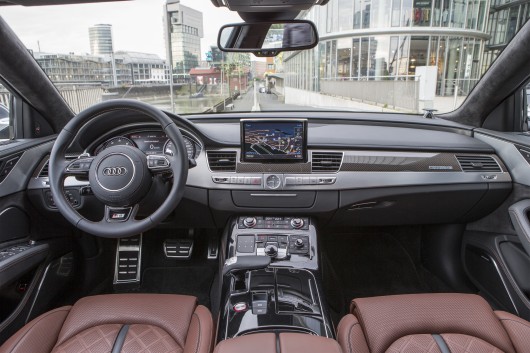 The petrol-powered line-up includes a 3.0-litre V6 TFSI which offers 310hp and 440Nm of torque, a W12 6.3-litre FSI in the long wheelbase A8 and the performance orientated S8. The S8 is equipped with a 4.0-litre V8 TFSI engine, the same that powers the recently launched Audi RS6. In the S8 it develops 520hp and 650Nm of torque. The S8 does have a glorious soundtrack emitted through its quad exhausts, the power delivery is exceptional rapid although somewhat brutal in Dynamic mode. You can of course set the car up to your individual preferences in terms of throttle sensitivity, suspension stiffness and steering feel, through Audi’s drive control. All engines are mated to an eight-speed tiptronic automatic transmission, which suits the relaxed driving style of the car. If you do wish to push the A8 through some dynamic country roads you can of course take control of the gear changes manually and utilise the discreet paddles behind the steering wheel. When pushed the large presence of the car is felt, thanks to quattro permanent all-wheel drive grip is not compromised when the pace is increased. A sports differential is fitted as standard to the V8 diesel and S8 models, and optional on the other models. On tight corners with the sports differential installed the car feels more nimble and planted. 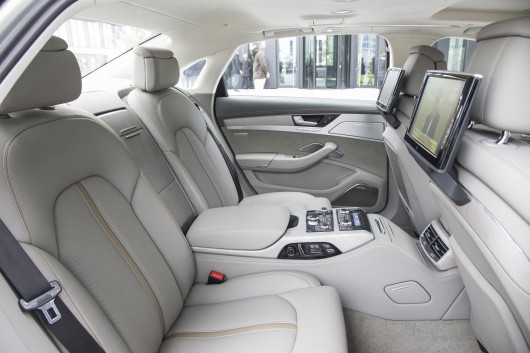 The cabin insulation is exceptional, this is a luxury car after all so a good deal of A8 owners will no doubt spend time in the rear. Consequently I travelled in the rear passenger seat of the W12 A8 which is a long wheelbase model (LWB), with the emphasis clearly on maximum comfort for those travelling in the rear. Customers can specify a rear seat relaxation package which was fitted to our test car. The rear seats are heated and can be electrically adjusted in a multitude of ways to relax on your journey, they also have a massaging function. The front passenger seat even folds down to reveal a footrest for the rear seat passenger while wifi is enabled with an infotainment system and rear screen for entertainment or to keep on top of business whilst on the move. China is Audi’s largest market for this long wheelbase model, accounting for 100 per cent of its A8 sales, the United States of America is second to this, with the LWB contributing to 75 per cent of its A8 sales. Although the LWB A8 offers supreme comfort and refinement all variants of the A8 have a class-leading interior. The instruments and switch gear are laid out precisely and are straightforward to use. Personally this is where I believe the A8 notches above its closest rivals which include the BMW 7 Series, Jaguar XJ and Mercedes-Benz S-Class. We will be testing the new S-Class for the first time later this week, which promises to be exemplary too. 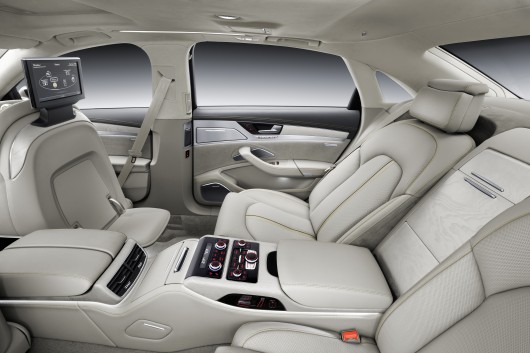 Audi has demonstrated its cutting edge technology in car design yet again with this new Audi A8, its introduction of the MatrixBeam LED headlights will no doubt be a large talking and selling point, however beyond the lights is a seriously impressive feat of engineering that any motorist will appreciate. The combination of Audi’s technology commendable craftsmanship and quattro permanent all-wheel-drive has suitable impressed us yet again. 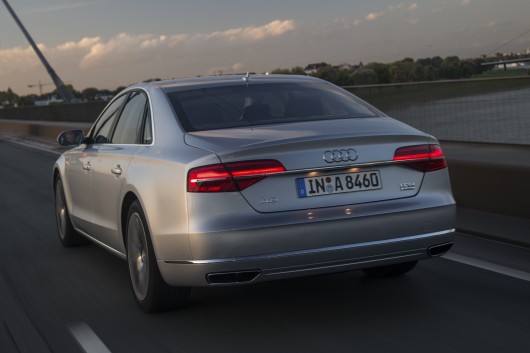