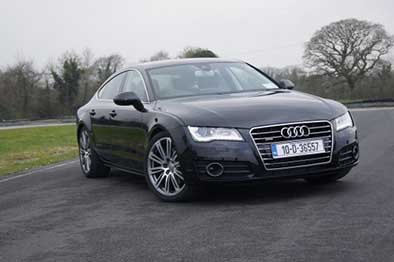 Audi’s first foray in to the executive coupe market was undertaken with the introduction of the A5 Sportback. If you prefer something more generously proportioned, Audi also have the A7 on offer.

The A7 is available to Irish motorists with a choice of two petrol and two diesel engines. Without doubt, the vast majority of sales will be diesel powered. The new €61,860 3.0TDI which was only recently added to the range produces 204hp and has an average fuel consumption figure of just 5.3l/100km. As a result, it’s placed in tax band B. 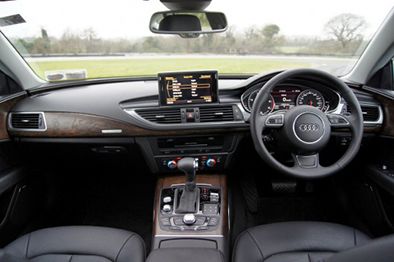 My test car was the €66,900 245hp 3.0 TDI version. It’s a beautifully proportioned car, and is pleasing to look at from any angle. The optional 20” anthracite alloys fill the arches and give the car a real presence on the road. For a car of this size and weight the 245hp TDI provides for a powerful driving experience and is extremely capable, with a 0-100km/h time of just 6.3 seconds. Audi’s seven-speed S-Tronic gearbox provides near-instant gear changes and offers a relaxed drive.

The A7’s interior is crafted to an extremely high standard. The large curved dashboard neatly conceals the 7” colour screen which automatically folds out on start-up. The centre console hosts some elegant aluminium switches for controlling the main menus. Audi’s MMI (Multi Media Interface) which comes fitted as standard, is straightforward and intuitive to use. The system in my car had the optional MMI touch, which integrates a touchpad for use with the navigation and multimedia system. You can use your fingertip to write the letters for a destination input to the sat nav, or for locating a name in your telephone’s address book. 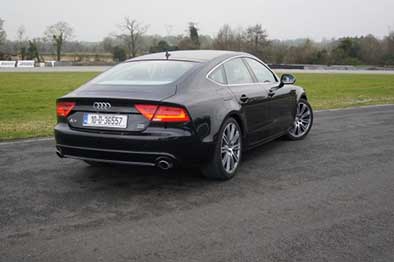 Having ample room for four adults and their luggage, a powerful economical TDI engine, the safety of Quattro four-wheel drive, and stylish looks, the A7 certainly has some strong points on offer.