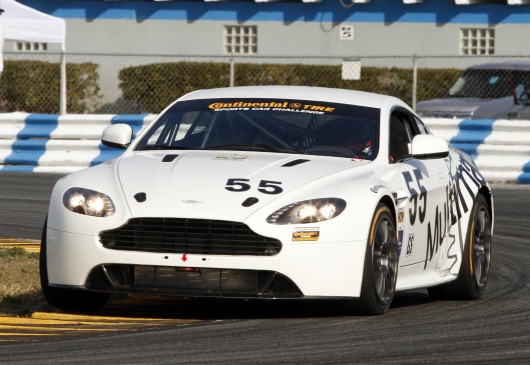 Aston Martin is underway with its final preparations for the start of its Grand-Am campaign which starts tomorrow. This will be the first round of the 2012 Continental Tire Sports Car Challenge (CTSCC) held at the Daytona International Speedway.

Aston Martin Racing has paired with Toronto-basedMultimatic Motorsports to enter a pair of Vantage GT4s in the Grand American Road Racing series. The lead car will be driven by Scott Maxwell and Joe Foster, while Hollywood movie star Patrick Dempsey will drive the second car.

The Vantage GT4 cars for the CTSCC have been modified in key areas from standard GT4 specification by Aston Martin Racing to comply with Grand-Am regulations and to hone the chassis set-up specifically for the North American Series. David King, Aston Martin’s Head of Motorsport said: “The first round of the Grand-Am Continental Tire Sports Car Challenge at Daytona will see Aston Martin realise a long-held desire to have the Vantage GT4 competing regularly in North America. Aston Martin Racing has built and sold nearly 100 Vantage GT4s since we raced the first one at the Nürburgring 24 Hour race in 2006, and it’s great to be present at last in such an important market with such a strong and experienced partner as Multimatic.”

The race starts at midday (1200hrs) local time. Aston Martin Racing will have regular updates on its facebook www.facebook.com/astonmartinracing