Irish sports car racer Damien Faulkner has the sweet taste of success from last weekend’s race at the Circuit of The Americas Austin, Texas. Faulkner and his TRG team mate Ben Keating took victory in the in their number 66 Porsche GT3, at the latest round of the prestigious American Le Mans Series. Having qualified in pole position Keating started the race and settled into second place where he battled closely with the number 30 GTC car. After Keating’s fantastic opening stint, Damien Faulkner assumed the driver’s seat directly behind the number 30 Porsche.  As time drew down to the 2 hour 45 minute time limit, Faulkner and the number 30 car had not only their own race to contend with but also the Prototype and GT Cars in a battle as well.  The increased traffic allowed Faulkner to find a way to get a run on the No. 30 Porsche. He made a brave pass with five minutes left in the race and drove away to victory by more than 10 seconds.

Commenting on his victory the Irishman who has made a name for himself stateside said, “I am so pleased.  We all worked so hard, but especially the TRG crew.  The season has had tough luck, so to win today makes the win that much sweeter.” 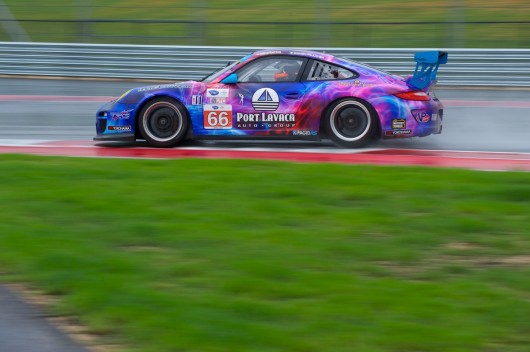