Home Latest News All New Seat Leon On The Way 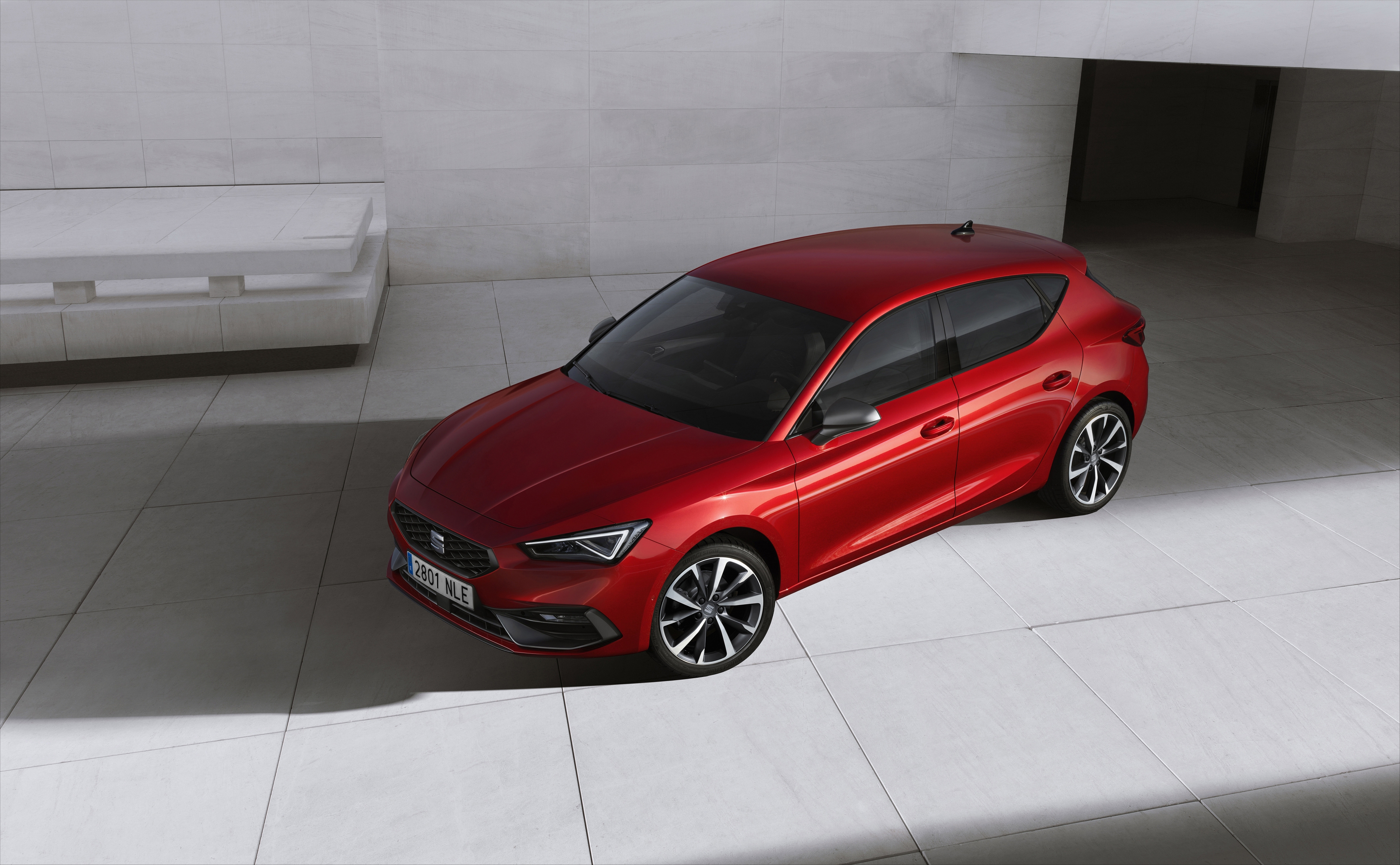 SEAT presented today at the Martorell facilities the all-new SEAT Leon, a vehicle aiming to enliven the compact segment. The company has invested 1.1 billion euros in order to bring vehicles with more efficient engines, next levels of connectivity and driving assistance, great dynamism and more eye-catching aesthetics to the market. The SEAT Leon has always been a core pillar in the brand’s vehicle line-up, and a reference point for the segment, proven by its more than 2.2 million unit sales over its three-generation life. The fourth-generation has been designed and developed to continue this huge accomplishment and take it to the next level in terms of connectivity, efficiency, dynamism, and safety. The all-new SEAT Leon is designed, developed and produced in Barcelona, at the brand’s Martorell facilities.

“The SEAT Leon is our best-selling model and we want to continue its great track. Therefore SEAT has invested more than 1.1 billion euros in the all-new SEAT Leon, mainly in the vehicle development and in the improvement of the production facilities.” said Carsten Isensee, SEAT’s Acting President and Vice-President for Finance and IT. “2019 has been a record year for the company. We have sold more than 570,000 cars, the highest volume in our 70 years of history and we have achieved one of the best production figures ever, as we produced more than 500,000 cars in Martorell. A great basis to start this 2020” added Isensee.

Niall Phillips, Brand Director at SEAT Ireland commented, “The Leon is a firm favourite amongst Irish customers and we are confident that they will love the fourth-generation Leon even more. This model will bring a new level of technology, design and safety to this segment and we are excited to see the all-new Leon on Irish roads from May onwards. The Leon is hugely important to the brand, not only because it represents SEAT’s core DNA and values, but it will open up the brand to an even wider audience with the introduction of the mild hybrid and plug-in hybrid powertrains.”

The SEAT Leon remains a core model for the brand in the Irish market. Since the first Leon was sold in Ireland in 2000, over 13,300 SEAT Leon’s have been sold in Ireland from the first three generations. The vehicle’s basis is the advanced MQB Evo platform, which provided the dimensions, flexibility, and adaptability the design team required to bring an improved sense of proportions to the next-generation vehicle’s design. In its 5-door variant, the all-new SEAT Leon is 4,368mm long (+86mm), 1,800mm wide (-16mm) and 1,456mm high (-3mm). The wheelbase stands at 2,686mm, which is 50mm more than the third generation SEAT Leon.

In its Sportstourer version, the all-new Leon is 4,642mm long (+93mm), 1,800mm wide (-16mm) and 1,448mm high (-3mm). The wheelbase stands at 2,686mm, which is 50mm more than the previous generation which will hugely appeal to fleet customers. The all-new SEAT Leon builds on the appeal of its predecessor but with a stronger personality, helped by its smooth flowing surfaces and the perfect mix of edges and curves in the right places. And while the exterior aesthetics are what draws the eye, its style also enhances the vehicle’s overall efficiency with improved aerodynamics; the all-new SEAT Leon’s drag co-efficient has improved by around 8% compared to the previous generation. 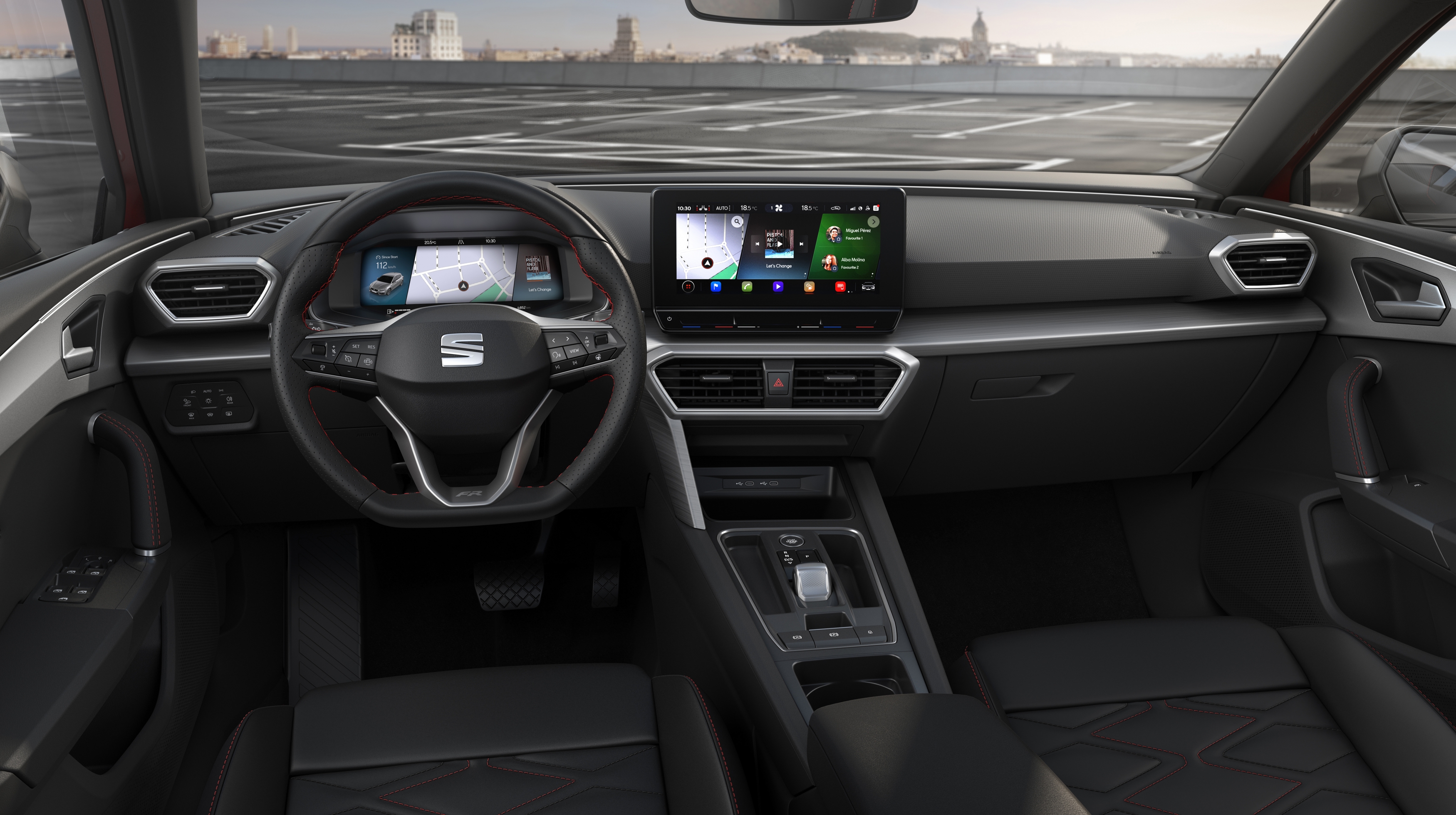 The all-new SEAT Leon’s front provides greater personality, with a stronger three-dimensional connection between the grille and front lighting. The LED headlights are set back, providing an eyebrow effect, giving a deeper focus and making it instantly recognisable to other road users. The excitement and creativity continue at the rear emphasised by the coast-to-coast LED light and a boot designed to maintain the dynamic personality of the vehicle. Both the lighting system and spoiler create lines that generate the notion of speed, even when the car is not moving at all.

The all-new SEAT Leon’s interior is the pinnacle of functionality, minimalism, and sleekness. Its smooth-surfaced, slim yet wide dashboard gives the impression of lightness, and a degree of “floatability”. Everything in the cabin has been designed to be ergonomically precise, increasing interior comfort for occupants. Whether sitting in the driver’s seat, as a passenger or in the rear.

The interior’s main protagonist is its central 10” infotainment screen, which includes gesture recognition, delivering precise interaction with the occupants and reducing the number of physical buttons required. Although functions that are more critical to use remain controlled by more conventional interaction systems.

The all-new SEAT Leon pushes the boundaries of what is possible in the segment with the range of lighting technologies integrated both outside and inside of the vehicle. The cold white light colour of the optional full LED headlights, which include the brand’s signature design, provide unmatched luminosity while integrating all the critical functions: low beam, high beam, daytime running lights and dynamic indicators. 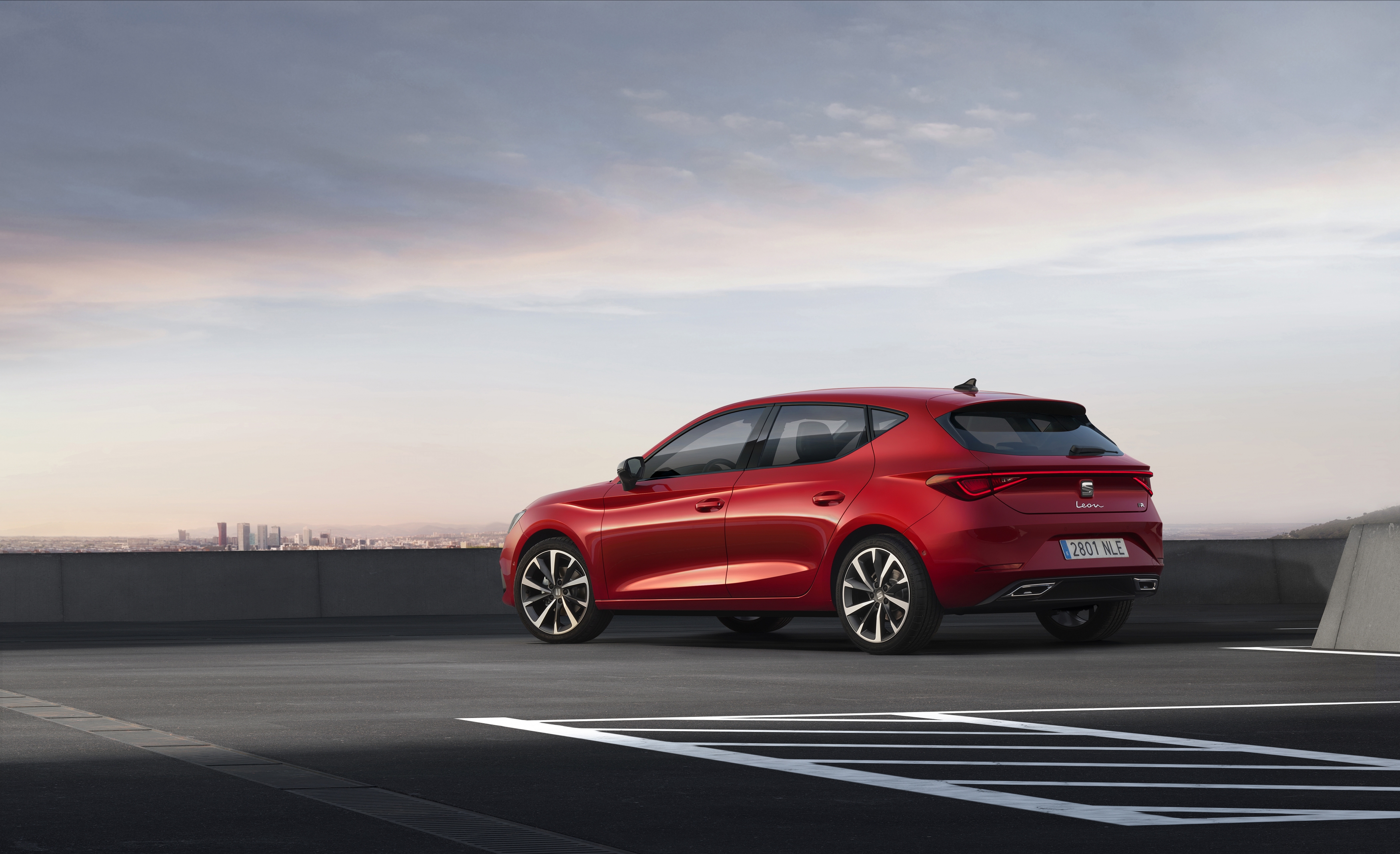 The vehicle’s side mirrors include integrated LED indicators, and on vehicles with the full LED option include welcome lights that greet the driver and passengers projecting the word “Hola!” onto the ground as you activate the vehicle. The all-new Leon also includes dynamic LED indicators making the vehicle’s direction of travel clearer and therefore safer

Inside a full-LED wraparound ambient lighting system bringing increased personality to the interior. The lighting sweeps around the front of the cabin, from the front doors and across the top of the dashboard, creating an arc of light that brings the Leon’s interior character to life and can change colour and tone depending on need. And it’s not only an ambient decorative light, but it also provides a number of key functions such as blind spot detection or exit assist.

The all-new SEAT Leon is the brand’s first fully connected vehicle. At the heart of the Leon’s system, there is its SEAT Digital Cockpit, which brings together a high-resolution 10.25” user definable instrument cluster and infotainment system. The standard Media system boasts an 8.25” screen with smartphone audio compatibility, while the larger 10” screen Navi system offers 3D connected navigation, Retina display capability, and natural voice control as well as gesture recognition to simplify user interaction.

Its Full Link system, is the gateway to connectivity, allowing users to connect their mobile devices, via Android Auto or wireless Apple CarPlay, to the vehicle’s infotainment system, and bring their digital eco-system into the vehicle in a controlled, intuitive, safe manner that won’t distract drivers from the road using either the infotainment system, integrated steering wheel controls or voice recognition. And with the optional Connectivity Box with inductive charging that meets Qi standard protocols, users needn’t worry about losing power at crucial moments.

And the Online Connectivity Unit with an embedded SIM means that the all-new SEAT Leon will never lose its connection to the digital world. The technology means some infotainment functions to use real time information from the cloud, adding an additional dimension to the traditional navigation system. In the future that will access the latest infotainment apps which can be updated at any time, and the built-in eSIM also means that the SEAT Leon benefits from the eCall service, which directly contacts emergency services should an incident occur. Add to the mix the SEAT Connect app which can be downloaded to your smart device, giving remote control over a plethora of functions that will help maximise the driver enjoyment and help improve safety too.

The new-generation compact car benefits from petrol (TSI), diesel (TDI),  mild-hybrid (eTSI) and plug-in hybrid (eHybrid) units, each designed to deliver the highest levels of performance and driveability, giving customers the right combination of vehicle and engine to match their specific needs. The latest generation Leon not only looks remarkable, it has an efficient heart. The engines fitted to the Leon have the latest technology ensuring low emissions, and as such fuel consumption. This is not only good for the environment but also reduces the cost of Road Tax, VRT, and overall Fuel Costs for the customer.

The new Leon’s offer of standard petrol engines are all direct-injection, turbocharged units and provide power outputs between 81kW/110PS and 140kW/190PS. The lower output engine which produces 81kW/110PS of power is a 1.0 litre TSI three-cylinder units, which is used in the SEAT Leon for the first time. Available with 110kW/150PS, the larger 1.5 litre petrol engine offers a level of performance that will bring a smile to the face of the driver but with the reassurance of optimised efficiency. At the top of the tree is the 140kW/190PS 2.0 litre TSI unit linked to the dual-clutch transmission. Diesel remains an important technology in reducing carbon emissions, and the all-new Leon benefits from three diesel powertrain options: all 2.0 litre TDI units with outputs of 85kW/115PS and 110kW/150PS. 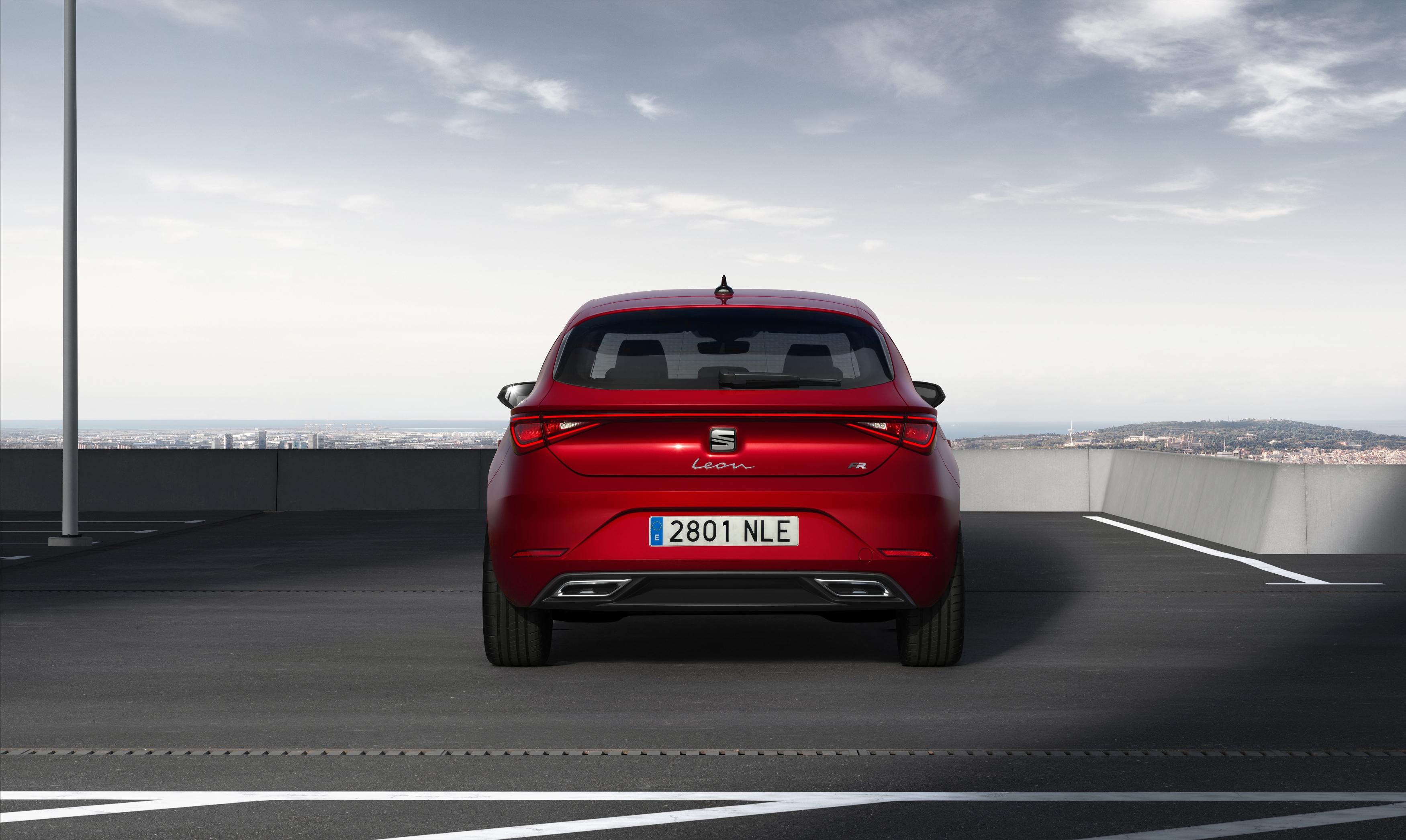 The all-new SEAT Leon mixes an abundance of standard technology and options, so no matter which trim level is picked under SEAT Ireland’s EasyChoice product offering structure– SE, SE Plus, Xcellence, Xcellence Plus, FR, and FR Plus – the vehicle will offer everything the driver needs, and personalised to the highest level.

Safety is at the heart of the all-new SEAT Leon. It integrates some of the most advanced driver assistance systems available, including predictive adaptive cruise control, emergency assist and travel assist, to make it the safest car the brand has ever made. The various technologies mean that the SEAT Leon senses its environment to offer optimum protection no matter what scenario occurs when you’re behind the wheel, taking safety to the next level.

Thanks to the all-new SEAT Leon’s DCC Dynamic Chassis Control, the vehicle’s ride and handling can change depending on the conditions and the driver’s requirements, making the vehicle more comfortable. The adaptive chassis technology constantly reads the road conditions, while also taking into account steering input, braking, and acceleration, to adapt the suspension, optimising damping at each wheel to provide comfort and dynamics like no other.

The all-new SEAT Leon epitomises the core values of the brand and its goal of offering the best vehicles possible, with the next-generation Leon, the compact segment is going to feel a transformative force when the vehicle is launched in the second quarter of 2020. Pricing of the fourth-generation Leon will be announced when the Leon launches in the Irish market.