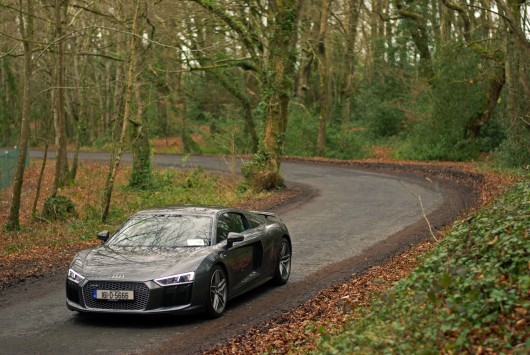 Stiffer, lighter, faster and more powerful than ever before; on paper the new Audi R8 would appear to be an improved version of an already very good sports car. Now I use the words “sports car” because my general feeling is that the term supercar is so casually brandished about these days that perhaps we’re at risk of losing its true meaning. It’s a title which must be earned.

The over use of the term super is not just limited to cars either. In the ever expanding worlds of Marvel and DC, we’re being introduced to new ‘Superhero’ movie franchises on an almost monthly basis. They are all heroes but are they all that super? We’ve only to point our gaze in the direction of Tony Stark/Ironman – who of course happens to probably be the world’s most infamous R8 owner. Sure the Avengers movies in which he stars fall into the superhero genre but can we really consider the Hawkeye or Black Widow characters to be all that super? Yes they have undoubted abilities and they certainly kick the bad guys ass from time to time but ‘super’ they are not. Ironman himself however, well he obviously is.

Now in four wheeled terms it was cars like the Lamborghini Countach or Ferrari Testarossa which defined all that made a car super. Their levels of performance were phenomenal for their time, but now in an era of Aventador’s and 458 Speciale’s are those originals any less a supercar? Absolutely not, because while performance is an unquestionable, essential element in the recipe for a super car; it’s the desirability, that head-turning factor and perhaps even the overall madness of the car which makes or breaks it. When it was launched back in 2007, the original R8 fell just short. It was well made, luxurious and fast but it was maybe just a tad too safe to justify the Supercar tag. Heck it was just too Porsche nine-eleven-ish. 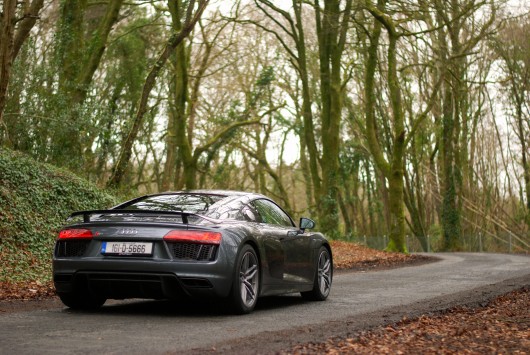 Now you could be forgiven for not immediately seeing a huge difference in the look of the new R8 from that of its predecessor.  It hasn’t really changed as much as it has evolved. It would’ve been an understatement to say that the original R8 was quite a handsome car but it was far from amazing to behold. This new model benefits greatly from a few straighter edges and sharper lines and the splitting of the distinctive ‘Sideblade’ into two separate sections, all of which do wonders for the new R8. Overall it looks and feels sharper – a more aggressive appearance. The V10 Plus gets a fixed carbon fibre rear wing instead of the pop-up aerofoil on the regular V10; as well as carbon fibre door mirrors, side blades and diffuser.

In addition to that the Plus has 19” 5 Arm V Design forged alloy wheels behind which sit the carbon-ceramic brakes. The full-LED headlight units are standard while Audi’s laser high beams are available as an added option. Walk around the R8’s blocky rear end and the width of the car is delivered in full effect. The fixed rear wing on the V10 Plus emphasises this even further. It’s very much a case of less-is-more too because under the skin of the R8, it has a new stronger and stiffer chassis of carbon and hand-welded aluminium. In fact it’s 15% lighter than that of its predecessor. On top of all that the R8 V10 Plus is a further 40kg lighter than the regular V10. 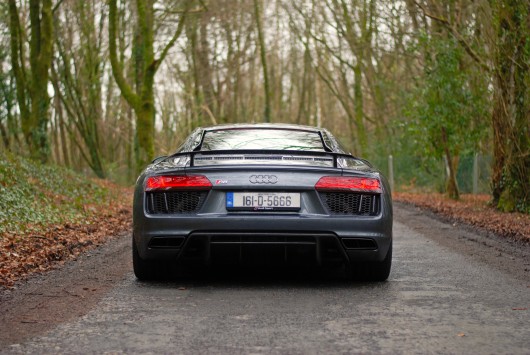 What separates the R8 from its competitors though is the everyday usability of it. Visibility is excellent for this type of car. Entering and exiting the R8 is dignified, regardless of your dodgy hip or banjaxed knees. The test car came with the optional R8 leather sports seats and while the seats themselves were both comfortable and very supportive; I couldn’t help wish the driving position was a little lower. A storage shelf behind the seats supplements the cargo area under the bonnet but as with all these types of cars it’s really just capable of taking one small overnight bag. As is often the case in high performance cars such as this, once the driver sits inside the best view of the car is lost on them. Not with the Audi R8 however. The cockpit is a place of absolute beauty. The mixture of leather, carbon fibre and bare metal is well balanced throughout and is just sporty enough while retaining the level of luxury you’d expect from the R8’s price tag.

All the latest tech is present too. It has the new virtual cockpit screen in the form of a 12.3in TFT display on the binnacle, where high-resolution satnav mapping and a variety of useful information is presented to the driver. The R8’s designers have pinched a few nicely styled bits and bobs from the TT including the air-con vents. The Plus’s steering wheel is adorned with a couple of extra buttons more than that of the regular V10. Here you’ll find the ‘Start’ button – why Aston place the V12 Vantage S version on the centre console is beyond me, the steering wheel is clearly the coolest place for it! Just beneath that is the button to toggle the sports exhaust between very loud and the “your neighbours will never forgive you” setting – it’s totally worth it though because nothing spits and snarls quite like that glorious V10. 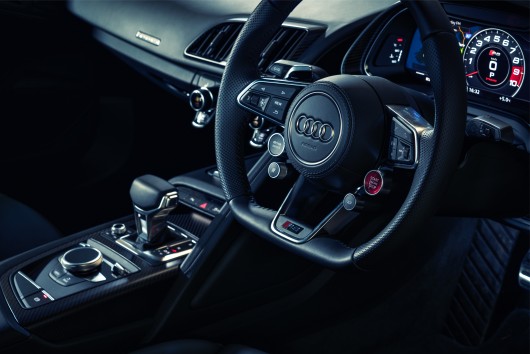 Unlike the previous incarnation of the R8, this latest model is only available in a mid-engined V10. The V10 uses an updated version of the old car’s 5.2-litre naturally aspirated engine to drive the Quattro four wheel drive system. There is no V8 alternative this time round. Audi instead have decided to distinguish between the top and mid-level versions by giving the V10 Plus more power and torque. Sadly there is no open-gate manual because both versions are fitted with a seven-speed S-tronic dual-clutch gearbox. Paired with one of the great modern performance car engines, the gearbox is quite brilliant. It delivers each up or down shift with more gusto than you could ever manage yourself and each new gear arrives in a flawlessly smooth action.

Audi quote the fuel economy of the R8 V10 Plus at 12.3l per 100km (23mpg); however in real world driving you can expect it to sit somewhere between 10 and 11L per 100km. Regardless, for a car such as this, that’s not a figure to be sneered at. This latest generation R8 comes with advanced Cylinder-on-demand meaning when you don’t need the full power of the all-new R8 V10, it automatically shuts down five of the 10 cylinders. It’s something that can significantly improve your consumption and emissions, particularly in city traffic. Accelerate on the open road again, and within milliseconds, all 10 cylinders – and full engine power – are seamlessly back at your disposal.  It’s also worth noting that the fuel tank in the Plus model is approximately 10L smaller than the 83L cell in the standard V10. The base model is good for 533bhp at 8250rpm while the V10 Plus has an output of 602bhp. The Plus will do 0-100kmph in 3.2 seconds and with enough tarmac in front of it, it’ll continue all the way to 330kmph. In terms of torque, we’re talking 560Nm at 6500rpm. With those figures behind it, the R8 V10 Plus can comfortably call itself the fastest road going Audi ever. 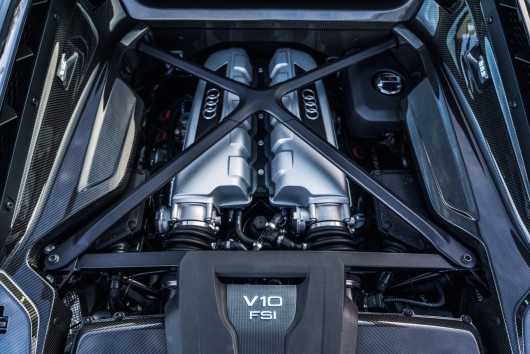 Both models have a Dynamic Drive system which allows the driver switch between Comfort, Auto, Dynamique and Indvidual. The Plus model goes one further with selectable Dry, Wet and Snow settings. Get behind the wheel of the R8 and you are treated to one of the most enjoyable drives possible. Turn-in and the levels of mid-corner grip are astounding. The carbon ceramic brakes are excellent and once they’ve warmed up, give you the added confidence to push the R8 on that little bit harder.  Few cars are capable of delivering this level of performance in such a reassuring manner.

In these days when the traditional big guns such as Ferrari and Porsche are making the switch to smaller capacity turbo-charged engines, it’s a relief to see Audi sticking to their guns and retaining what could only be described as a Marvel-ous V10. The experience of that instant throttle response as you push on past 8000rpm makes you immediately conscious that no turbo’d engine will ever be able to replicate that feeling.  Maybe it was the smaller V8 option or the slightly softer curves of the first generation R8 which made me doubt its supercar pedigree, who knows? But from now on, I’ll be referring to the Audi R8 V10 Plus as a “Supercar”! 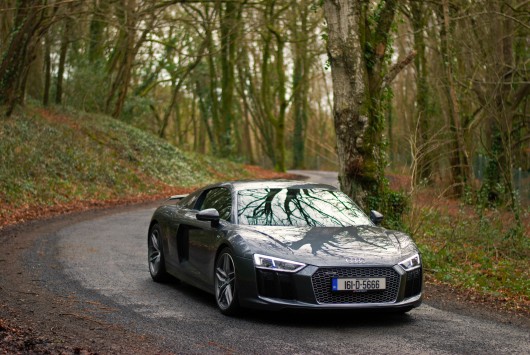 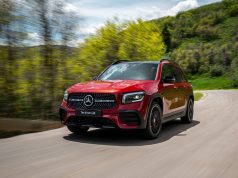